What are Tiger Woods’s net worth and career earnings?

Tiger Woods is an American professional golfer who has a net worth of $800 million. Every year Tiger earns $50-60 million. For example, between June 2019 and June 2020 he earned $63 million from his various endeavors. Since turning pro in 1996, Tiger’s career earnings top $1.5 billion. That’s the same as around $1.8 billion after adjusting for inflation. He is the highest-earning golfer of all time and was the highest-earning celebrity on the planet for many years.

The accolades he has earned are too numerous to list in their entirety but some highlights include: 15 professional major tournaments, 81 PGA Tour wins, 41 European tour wins and five Masters wins. He has been ranked #1 for more consecutive weeks than any other player.

He has the lowest scoring average of all time. He has been crowned PGA Player of the year 11 times, Sports Illustrated’s Sportsman of the year twice, and AP Male Athlete of the year 4 times.  Woods is widely regarded as one of the greatest golfers, and one of the most famous athletes of all time. He will be inducted into the World Golf Hall of Fame in 2021.

Eldrick Tont “Tiger” Woods was born on December 30, 1975, in Cypress, California to Earl and Tida Woods. He is their only child. He has two half-brothers, Earl Jr. and Kevin, and a half-sister, Royce, from his father’s first marriage. Tiger’s mother is originally from Thailand. Tiger has called his ethnicity Cablinasian — as in Caucasian, Black, American Indian, and Asian.

He was nicknamed Tiger in honor of his father’s friend Colonel Vuong Dang Phong, who had also been known as Tiger. Woods grew up in Orange County, California. Woods was introduced to golf before he turned two years old by his father Earl Woods. Earl was a single-digit handicapped amateur golfer. He was also one of the first African-American college baseball players at Kansas State University. 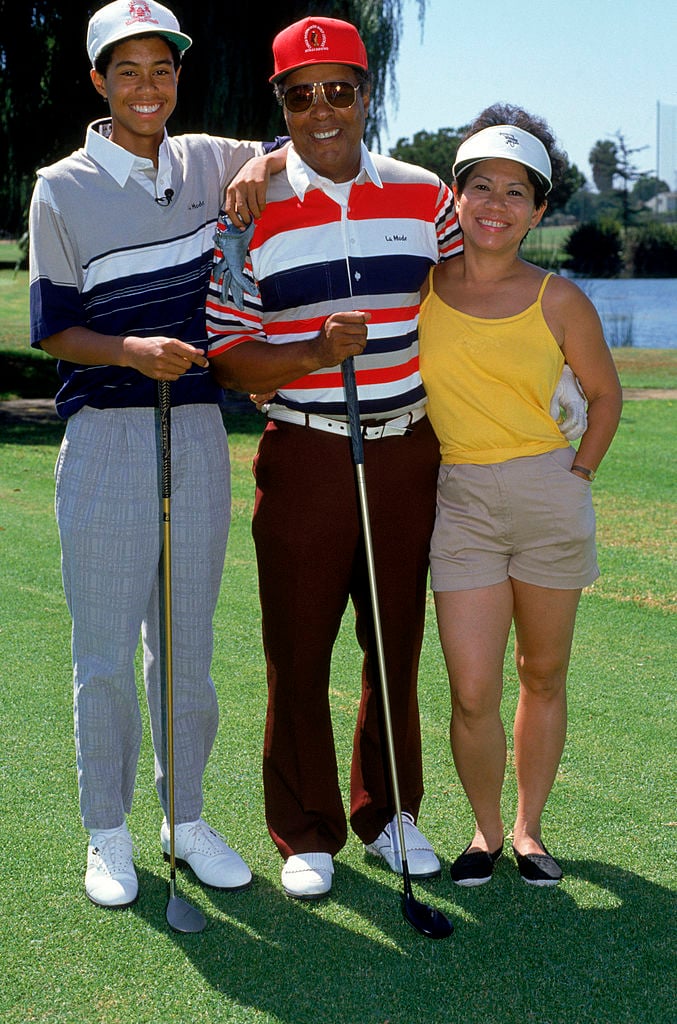 In 1978, during a television appearance on “The Mike Douglas Show,” Tiger put against comedian Bob Hope. At age three, he shot a 48 over nine holes. At age five, he appeared in “Golf Digest” and on ABC’s “That’s Incredible!”  Tiger won the Under Age 10 section of the Drive, Pitch, and Putt competition, held at the Navy Golf Course in Cypress, California when he was six years old.

Woods’ first defeated his father when he was 11, and Earl was trying his best to win that game. Earl lost to Tiger every time from then on.  Woods was a 15-year-old student at Western High School in Anaheim when he became the youngest U.S. Junior Amateur champion, a record that stood until 2010.

He was a member of the winning American team at the 1994 Eisenhower Trophy World Amateur Golf Team Championships. Woods graduated from high school in 1994 and was voted “Most Likely to Succeed” among the graduating class.

Woods was heavily recruited by the biggest college golf powers. He chose to attend school at Stanford University, the then reigning 1994 NCAA champions. He enrolled at Stanford in the fall of 1994 and won his first collegiate event, the 40th Annual William H.

Tucker Invitational, that September. In 1995, he successfully defended his U.S. Amateur title at the Newport Country Club in Rhode Island and was voted Pac-10 Player of the Year, NCAA First Team All-American, and Stanford’s Male Freshman of the Year (an award that encompasses all sports).

At age 19, Woods participated in his first PGA Tour major, the 1995 Masters, and tied for 41st as the only amateur to make the cut; two years later, he would win the tournament by 12 strokes.

At age 20 in 1996, he became the first golfer to win three consecutive U.S. Amateur titles and won the NCAA individual golf championship. He left college after two years in order to turn a professional in golf. 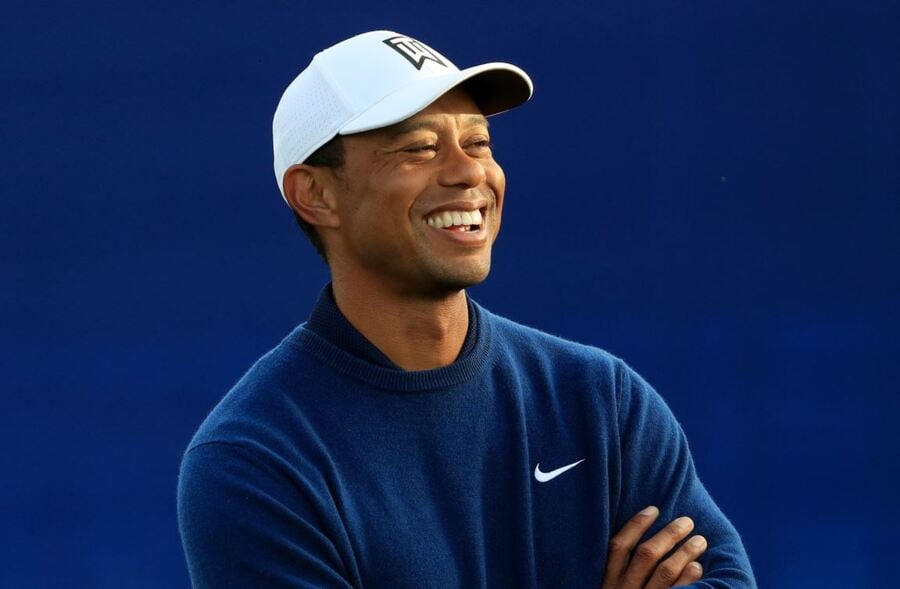 Woods turned pro in August 1996 at age 20 and immediately signed advertising deals with Nike and Titleist that ranked as the most lucrative endorsement contracts in golf history at that time. Woods was named “Sports Illustrated’s” 1996 Sportsman of the Year and PGA Tour Rookie of the Year.

On April 13, 1997, he won his first major, the Masters, which he won by 12 strokes in a record-breaking performance and became the tournament’s youngest winner at age 21. Two months later, he set the record for the fastest ascent to No. 1 in the Official World Golf Rankings.  After a lackluster 1998, Woods finished the 1999 season with eight wins, including the PGA Championship.

The next decade of Woods’ career was marked by comebacks from personal problems and injuries. Woods fell to number 58 in the world rankings in November 2011 before ascending again to the No.1 ranking between March 2013 and May 2014.

However, injuries led him to undergo four back surgeries between 2014 and 2017. Woods competed in only one tournament between August 2015 and January 2018, and he dropped off the list of the world’s top 1,000 golfers. On his return to regular competition, Woods made steady progress to the top of the game, winning his first tournament in five years at the Tour Championship in September 2018 and his first major in 11 years at the 2019 Masters.

Woods has held several golf records. He has been the number one player in the world for the most consecutive weeks and for the greatest total number of weeks of any golfer in history. He has been awarded PGA Player of the Year a record 11 times and has won the Byron Nelson Award for lowest adjusted scoring average a record eight times.

Woods has the record of leading the money list in ten different seasons. He has won 15 professional major golf championships and 82 PGA Tour events. Woods leads all active golfers in career major wins and career PGA Tour wins. He is the youngest player to achieve the career Grand Slam, and the second golfer (after Jack Nicklaus) to have achieved a career Grand Slam three times. Woods has won 18 World Golf Championships.

He was also part of the American winning team for the 1999 Ryder Cup. In May 2019, Woods was awarded the Presidential Medal of Freedom, the fourth golfer to receive the honor.

They got engaged in November 2003 and married on October 5, 2004, at the Sandy Lane resort in Barbados, and lived at Isleworth, a community in Windermere, a suburb of Orlando, Florida.

Woods and Nordegren’s first child was a girl born in 2007, whom they named Sam Alexis Woods. Woods chose the name because his own father had always called him Sam. Their son, Charlie Axel Woods, was born in 2009.

He took a self-imposed hiatus from professional golf from December 2009 to early April 2010 in an attempt to resolve marital issues with his then-wife, Elin. Woods admitted to multiple infidelities, and the couple divorced on August 23, 2010.

On May 29, 2017, Woods was arrested near his Jupiter Island, Florida, home by the Jupiter Police Department at about 3:00 am. EDT for driving under the influence of alcohol or drugs. He was asleep in his car, which was stationary in a traffic lane with its engine running.

He later stated that he had taken prescription drugs and did not realize how they might interact together. On July 3, 2017, Woods tweeted that he had completed an out-of-state intensive program to tackle an unspecified issue. At his August 9, 2017 arraignment, Woods had his attorney Douglas Duncan submit a not guilty plea for him and agreed to take part in a first-time DUI offender program and attend another arraignment on October 25.

At a hearing on October 27, 2017, Woods pleaded guilty to reckless driving. He received a year of probation, was fined $250, and was ordered to undergo 50 hours of community service along with regular drug tests. He was not allowed to drink alcohol during the probation, and if he violated the probation he would be sentenced to 90 days in jail with an additional $500 fine.

Tiger Woods Net Worth – How It Breaks Down

Tiger’s first revenue comes from winning tournaments and endorsing products. Since turning pro in 1996, Tiger has earned $118 million on the golf course (including $2.07 million he won at the 2019 Masters). That amounts to 7.6% of his total career earnings to date.

Gatorade developed a custom branded drink for Woods called “Gatorade Tiger”. The Gatorade deal alone was worth $100 million over 5 years.

At one time Tiger Woods earned $20 million per year to endorse Gillette along with fellow superstar athletes Roger Federer and Thierry Henry. Tiger commands $10 million to design golf courses all over the world and can earn as much as $1.5 million just to show up to a golf tournament.

How Long Did It Take Tiger To Earn $100 Million?

About a month later, on May 20, 1997, a day after winning the Byron Nelson Classic (the first tournament he entered after becoming the youngest player ever to win The Masters), Tiger signed a 5-year $30 million deal with American Express.

The American Express deal combined with his Nike, Titleist, and tournament winnings brought his career earnings to $100 million. In other words, after turning professional, it took Tiger just 8 months (264 days) to earn $100 million. By comparison, LeBron James’ first Nike deal, which was signed in 2003, was worth $90 million over seven years.

In September 2000, Tiger signed his second Nike endorsement deal. This deal was worth $100 million, over 5 years ($20m per year). In other words, between 1997 and 2005, Tiger earned $140 million from Nike alone. He likely earned a touch over $200 million from all deals during that seven-year period.

Real Estate and Other Assets 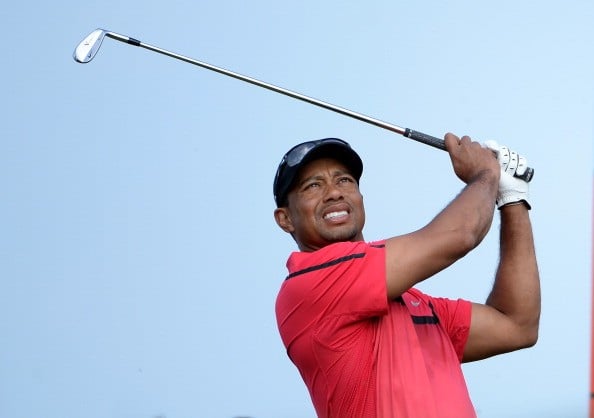 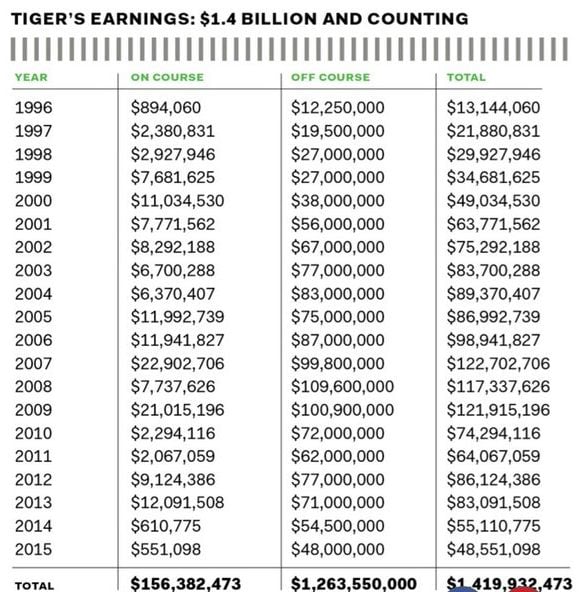 Tiger Woods married Elin Nordegren in 2004. Woods and Nordegren’s first child, a daughter named Sam Alexis Woods, was born in 2007, and their son, Charlie Axel Woods, was born in 2009. An infidelity scandal involving Tiger rocked the couple in 2009 and eventually led to the end of their marriage. With the controversy surrounding Tiger’s divorce from Elin Nordegren, his game and his relationships with sponsors have suffered, costing him millions in potential earnings. He also paid Elin $100 million worth of assets including cash and real estate.

In 2009 when his net worth was $500 million, Tiger was the second-richest person of color in the United States behind Oprah Winfrey who was worth $2.5 billion at the time.