What was Pernell Whitaker’s Net Worth?

Pernell Whitaker was a retired professional boxer and professional boxing trainer who had a net worth of $250,000 at the time of his death. Known by his fans as “Sweet Pea,” Whitaker established himself as a defensive master during his successful boxing career. Although Whitaker earned millions during his time as a professional athlete, he later experienced considerable financial issues. His career lasted from 1984 until 2001. After he retired from boxing, he became a boxing trainer.

Over the course of his time in the ring, Pernell won titles in four weight classes, including lightweight, light welterweight, welterweight, and middleweight. He was once the undisputed lightweight champion, and he also held lineal lightweight and welterweight titles. In 1989, he won the Fighter of the Year award, and he is now considered one of the top 10 fighters within the past 80 years. No one else has had a longer unified lightweight championship reign. In 2006, Whitaker was inducted into the International Boxing Hall of Fame. In 2019, he passed away after a pedestrian traffic accident.

Pernell Whitaker Sr. was born on January 2nd of 1964 in Norfolk, Virginia. Raised alongside two siblings, Whitaker took to boxing at the young age of nine. He then established an impressive amateur career, fighting in 214 fights and winning 201. 91 of these wins came by knockout. He later claimed that he had approximately 500 amateur fights before turning pro. Early losses came against Angel Herrera Vera at the World Championships in 1982, but he later beat this opponent four other times. Pernell then finished he amateur career by winning an Olympic gold medal in 1984, beating Luiz Ortiz in the process.

Shortly after turning pro, Whitaker defeated Alfredo Layne, a former world champion. He then went on to defeat Roger Mayweather, who held the Super Featherweight and WBC Light Welterweight titles at the time. In 1988, he challenged José Luis Ramírez for the WBC Lightweight title, but suffered his first defeat in a highly controversial split decision. The fight was later considered a “disgrace” by many boxing experts – one of the worst in the history of the sport.

Pernell continued to impress, however, winning a match against Greg Haugen to win the IBF Lightweight title in 1989. Previously, Haugen had never been knocked down. Throughout the 90s, Whitaker defeated a vast number of title challengers, winning against fighters like Freddie Pendleton, Azuma Nelson, and Juan Nazario. After defeating the latter fighter, Whitaker became the first Undisputed Lightweight Champion since Roberto Duran. He also beat Jorge Paez and Poli Diaz during this period.

In 1992, Pernell decided to move up a weight class, fighting and beating light welterweight titleholder Rafael Pineda. He then moved up once again, winning against Buddy McGirt to claim the Lineal and WBC Welterweight titles. This set Whitaker up for a fight against Julio César Chávez, who was widely considered to be the best pound-for-pound boxer in the world at the time. Like his earlier matchup against José Luis Ramírez, the fight ended in considerable controversy, as it was called a majority draw by the judges. Various media sources felt sure it was a victory for Whitaker. 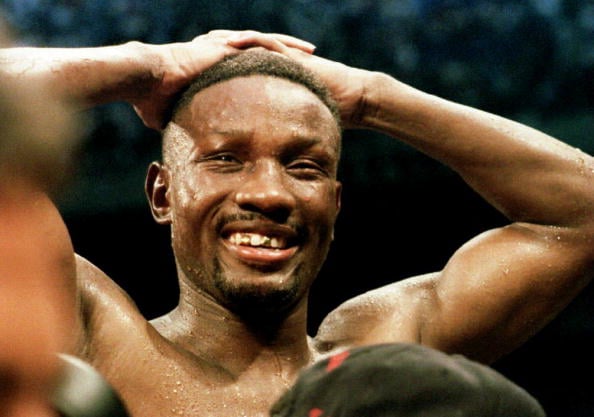 After a successful rematch against McGirt, Whitaker returned to the ring against Julio César Vásquez in 1995. Despite being knocked down in the early rounds, Pernell cruised to a comfortable victory and won the super welterweight title. This gave him four titles in four different weight classes, something only four other fighters have ever achieved. Whitaker then returned to welterweight, overpowering Gary Jacobs late in the fight to defend his WBC belt. He then attempted to repeat the feat against Oscar De La Hoya, but was ultimately thwarted by his opponent who won a disputed unanimous decision.

Unfortunately, things got worse for Whitaker, as he failed a drug test after his next fight that negated his win. He then lost once again against Felix Trinidad in 1999. This led to his final fight against Carlos Bojorquez. Finishing on somewhat of a low note, Pernell broke his clavicle in the fourth round and was forced to exit the fight. He was trailing on the scorecards at this point. After the fight, Whitaker officially announced his retirement from the sport. He then went on to train various fighters, including Dorin Spivey, Joel Julio, Calvin Brock, and Zab Judah.

Whitaker was widely celebrated for his exceptional defensive skills. He was particularly good at counterpunching as a southpaw, although he lacked significant knockout power. However, his lack of power was not a concern, as he was elusive enough to completely avoid his opponent while scoring consistent strikes with a strong overall offensive strategy.

In 2002, Whitaker was convicted of cocaine possession. He had violated the terms of a previous prison sentence, having overdosed on cocaine earlier that year.

In 2014, it was reported that Whitaker had successfully evicted his mother after a long and protracted court battle. He reportedly needed to sell the home that his mother was living in due to his financial issues. He had given the house to his mother almost 30 years prior when he purchased the Virginia residence in 1984. At the time of the 2014 report, it was reported that the home was worth $400,000. He planned to sell the residence to access the $150,000 of equity, which he would then use to pay off $18,000 in unpaid taxes on the building.

In 2019, it was reported that Pernell Whitaker had been struck and killed by a vehicle in Virginia Beach. The incident occurred at 10 PM on July 14th while he