What is Pedro Martínez’s Net Worth?

Pedro Martínez is a Dominican-American former professional baseball pitcher who has a net worth of $70 million. Pedro Martinez played in the MLB from 1992 to 2009. An eight-time All-Star, he reached his apogee between 1997 and 2003, during which time he played for the Boston Red Sox and won three Cy Young Awards. In 2004, Martínez helped the Red Sox end their long drought by winning their first World Series in 86 years.

Pedro Martínez was born on October 25, 1971 in Manoguayabo, San Domingo, Dominican Republic. He was the fifth of six children of Leopoldina, who washed clothes for wealthy families, and Pablo, who worked odd jobs. Martínez had his first job early on as a mechanic.

Later, as a teen, he carried his older brother Ramón’s bags at a Los Angeles Dodgers baseball camp in the Dominican Republic. Martínez made his professional debut in the 1989-90 season, playing with the Tigres del Licey of the Dominican Winter League. He subsequently pitched for the Azucareros del Este, and then rejoined Licey in 1991.

In September of 1992, Martínez made his MLB debut with the Los Angeles Dodgers in a game against the Cincinnati Reds. The next season, he made a strong impression as the team’s setup man, going 10-5 with 119 strikeouts in 65 games.

Martínez was traded to the Montreal Expos just before the 1994 season; it was with the team that he would hone his skills as one of the top pitchers in the league. In April, Martínez threw a perfect game through 7 ⅓ innings. In June of the following year, he pitched nine perfect innings in a game against the San Diego Padres. Later, in 1997, he posted a 17-8 record with the Expos and led the league in multiple pitching categories including ERA, strikeouts, and games pitched. As a result, Martínez won the National League Cy Young Award, becoming the only Expo player in history to have done so.

In November of 1997, Martínez was traded to the Boston Red Sox and was signed to a $75 million, six-year contract. He was an immediate success on the team, going 19-7 in 1998 and finishing second in the AL in ERA, strikeouts, and WHIP. Martínez had an even greater season in 1999, finishing 23-4 with a 2.07 ERA and 313 strikeouts in 31 games. Moreover, he won his second Cy Young Award. Between August 1999 and April 2000, Martínez notched ten consecutive starts with 10 or more strikeouts.

During this time, he set the record for most consecutive innings pitched without a strikeout, with 40. Martínez continued his dominance in the 1999 All-Star Game, earning MVP honors. Subsequently, he and the Red Sox made it to the ALCS, where he pitched seven shutout innings in Game 3 against the New York Yankees. This was the Yankees’ only loss during the postseason.

Following this barnburner of a year, Martínez spent much of 2001 on the disabled list due to a rotator cuff injury. He bounced back in 2002 to lead the league in ERA, WHIP, and strikeouts. Martínez led the league in ERA and WHIP once again in 2003. Although he had lost some of his forms in 2004, he ended the season and his Red Sox career by helping the team to its first World Series victory in 86 years. Martínez finished his tenure with the Red Sox with a 117-37 record, the highest winning percentage any pitcher has had in baseball history. 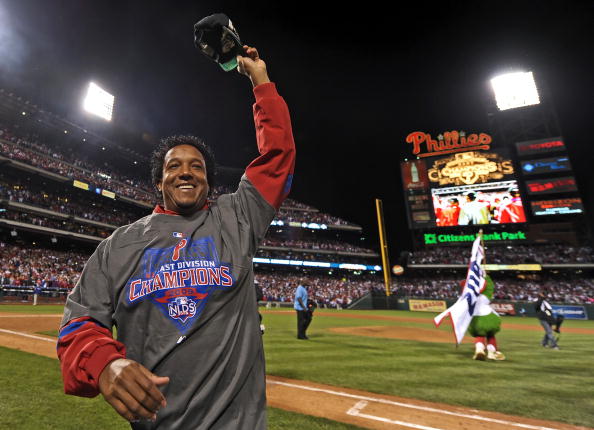 In 2005, Martínez became a free agent and signed a $53 million, four-year contract with the New York Mets. He had a strong first year on the team, going 15-8 with a 2.82 ERA and 208 strikeouts. Although he started the next season with a bang, a hip injury in May and a subsequent right calf injury derailed the remainder of his season. For most of 2007, he was on the disabled list.

Martínez returned in September to notch his 207th career win and his 3,000th career strikeout. His 2008 season was not nearly as strong, as he sustained injuries just four innings into his first game, and went on to finish the season with the first losing record of his career.

Martínez signed a $1 million, one-year contract with the Philadelphia Phillies in 2009. The team won each of his first seven starts, which was the first time in franchise history this occurred with a debuting pitcher. The Phillies went on to the NLCS, and then to the World Series against the Yankees, which they lost in six games. In December of 2011, Martínez officially announced his retirement.

During his playing career, Pedro earned $146 million in MLB salaries alone. He earned tens of millions more from endorsements. His highest single-season salary was $17 million, earned in the 2004 season from the Boston Red Sox. That’s the same as earning $25 million today after adjusting for inflation.

A couple of years after his retirement from playing, Martínez joined the Boston Red Sox as a special assistant to general manager Ben Cherington. Later, in 2015, he was hired by the MLB Network as a studio analyst. The same year, Martínez was inducted into the National Baseball Hall of Fame.