Muhammad Ali’s net worth: Muhammad Ali was a retired American boxer who had a net worth of $50 million at the time of his death. During his prime, Muhammad was one of the highest-paid athletes in the world. He died on June 4, 2016, at the age of 74.

Early Life: Muhammad Ali was born Cassius Marcellus Clay, Jr on January 17th, 1942 in Louisville, Kentucky. One of six children, he was named after his father, Cassius Marcellus Clay Sr.  His father painted billboards signs and his mother, Odessa O’Grady Clay, stayed at home to raise Cassius and his younger brother.

He attended Central High School in Louisville and struggled with a learning disorder throughout the school. Growing up amid racial segregation, Cassius experienced many acts of racial injustice and prejudice such as being denied getting a drink of water at a store. He was profoundly affected by the 1955 murder of Emmett Till, which led to him and a friend vandalizing a local railyard in a showing of protest.

Early Career: Ali became interested in boxing at the age of 12 after his bike was stolen and he flew into a wild rage at the scene of the crime. The police officer on the scene saw Clay’s anger and advised him to channel it into boxing. Cassius partnered with boxing coach Fred Stoner and together they would go on to win many championships including six Kentucky Golden Gloves, an Amateur Athletic Junior Title, and two National Golden Gloves.

He made his debut in 1954 in a victory against local boxer Ronnie O’Keefe. For the last four years of his amateur career, he was trained by Chuck Bodak. His biggest achievement as an amateur was winning the light heavyweight gold medal at the 1960 Olympics in Rome. His amateur record was 100 wins and 5 losses.

Professional Boxing Career: After the Olympics, Clay returned to Louisville where he began his professional career. He made his winning debut on October 29th, 1960 and he stayed undefeated for three straight years. 15 out of the 19 fights ended with knockouts. This was attributed to Clay’s unusual boxing style. Boxers of his height and figure usually relied on keeping their hands high to defend the face but Clay used his quickness to avoid punches and kept his hands low.

Clay quickly began to build a reputation for himself. He was famous for announcing what round his fellow boxer would go down and was right seven times. Beyond that, he also began taunting his opponents before each match. Soon Cassius became the top contender to go up against Sonny Liston, who was the current titleholder. Even though Clay had an amazing record, he still went into the fight as the underdog. In the end, Clay beat Liston and at twenty-two became the youngest fighter to ever steal the title from a heavyweight champion.

Cassius officially changed his name to Muhammad Ali in 1964 when he joined the Nation of Islam. In 1966, he refused to be drafted into the military, citing religious beliefs and opposition to the Vietnam War. Ali was arrested and found guilty of draft evasion. He was stripped of his boxing titles but appealed the decision to the Supreme Court. They overturned his conviction in 1971, but had been out of the ring for four years and had lost his peak and prime athletic performance.

His refusal to be drafted was lauded and supported by Civil Rights activists, with Al Sharpton speaking out about Ali’s bravery and his energizing force behind the movement. In 1970, he was honored with the Martin Luther King Award by civil rights leader Ralph Abernathy. Coretta Scott King, in a speech at the ceremony, added that Ali was a “champion of justice and peace and unity.” 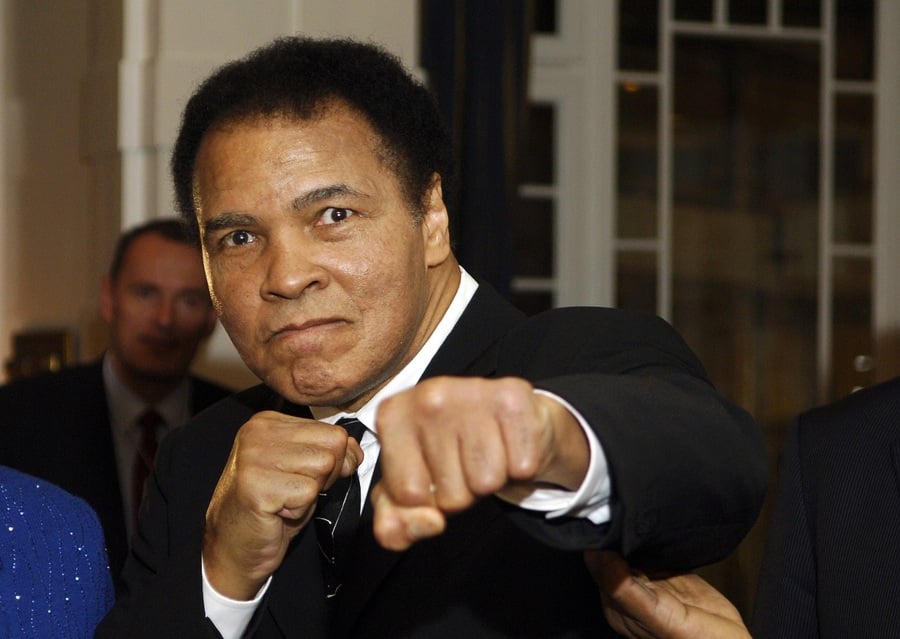 Later that year, Ali participated in what was hailed as the fight of the century when on March 8th he went up against heavyweight titleholder Joe Frazier at Madison Square Garden. The fight lived up to its name as the two undefeated fighters went toe to toe for 15 rounds. In the end, Frazier would take the fight, serving Ali his first professional loss. Ali and Frazier would fight two more times.

Their next fight was not a title fight because Frazier had already lost his title to George Foreman. This time Ali took Frazier down which set up a fight against Foreman. The match between Ali and Foreman was called “The Rumble in the Jungle” because it took place in Kinshasa, Zaire. Ali went into the fight once again as the underdog, and once again surprised the world when he defeated Foreman to regain the heavyweight title in 1981. Ali was famous for trash-talking in the ring and his spoken-word poetry in the ring resembled hip-hop and rap. In 1984 Ali was diagnosed with Parkinson’s Syndrome.

The syndrome took away Ali’s voice and motor skills. Regardless of this setback, he was very active in the fight against Parkinson’s during his lifetime. In 1996 he was given the honor of lighting the Olympic flame. Ali remains the only three-time lineal heavyweight champion. He will likely go down in history as one of the greatest heavyweight champions of all time.

Outside the ring, Ali was a talented musician who received two Grammy nominations. He also was an actor and a writer and released two autobiographies. He was well known for being a philanthropist and a humanitarian. Sadly, Muhammad Ali died of septic shock on June 4, 2016, at the age of 74, in Scottsdale, Arizona. His memorial was well attended by fellow sports figures and celebrities and was watched by an estimated 1 billion viewers worldwide.

Personal Life: Ali was married four times. He first married cocktail waitress Sonji Roi in August 1964 and they were divorced in January 1966. Ali married Belinda Boyd in August 1967 and they had four children together. In 1974, at age 32, Ali was in an extramarital relationship with 16-year-old Wanda Bolton.

The pair had two children together and were married in an Islamic ceremony that wasn’t legally recognized by the state. He married Veronica Porche in 1977 and they had two children together. They got divorced in 1986 and Ali married Yolanda Williams, who had been his close friend since 1964. They adopted a son. One of Ali’s daughters, Laila, was a professional boxer from 1999 until 2007.

Ali’s biggest career paycheck came in 1980 when he took home $7.9 million for fighting Larry Holmes. Interestingly, when adjusted for inflation, $7.9 million in 1980 is equal to $22 million today, which technically makes Ali’s $5.45 million 1974 check the biggest payday of his career.

In 2006, Ali reportedly sold the rights to his name and image for $50 million. As part of that deal, Ali held on to a 20% interest in his licensing. That 20% stake has resulted in $7 million per year in revenue.