What are Michael Jordan’s net worth, salary, and career earnings?

During his NBA career, Michael earned a total of $93.7 million in salary. He was the first athlete in history to earn over $30 million per year in salary. He accomplished that feat during the 1996-1997 season when he earned $30.14 million in base salary. The following season he earned $33.14 million which is the same as earning $53.4 million today after adjusting for inflation.

Even though he has not played basketball professionally in nearly two decades, today Michael earns $100 million per year from endorsements and various other business ventures. Please note that this is more in a single year than he earned from his salary in 16 NBA seasons. Michael earns at least $60 million every year from Nike/Jordan brand royalties.

Michael achieved billionaire status thanks to his ownership stake in the Charlotte Hornets NBA team. We will outline this investment in greater detail later in this article.

Jordan led the Chicago Bulls to 6 NBA championship titles. He is a five-time league MVP. He holds the record for the highest career scoring average of all time and was inducted into the Hall of Fame on September 11th, 2009.

“I’ve missed more than 9,000 shots in my career. I’ve lost almost 300 games. Twenty-six times I’ve been trusted to take the game-winning shot…and missed. I’ve failed over, and over and over again in my life. And that is why I succeed.”

We first added Michael Jordan to Celebrity Net Worth in September 2009 with a net worth of $500 million. He first became a billionaire six years later in 2014. He first topped $2 billion in early 2020. 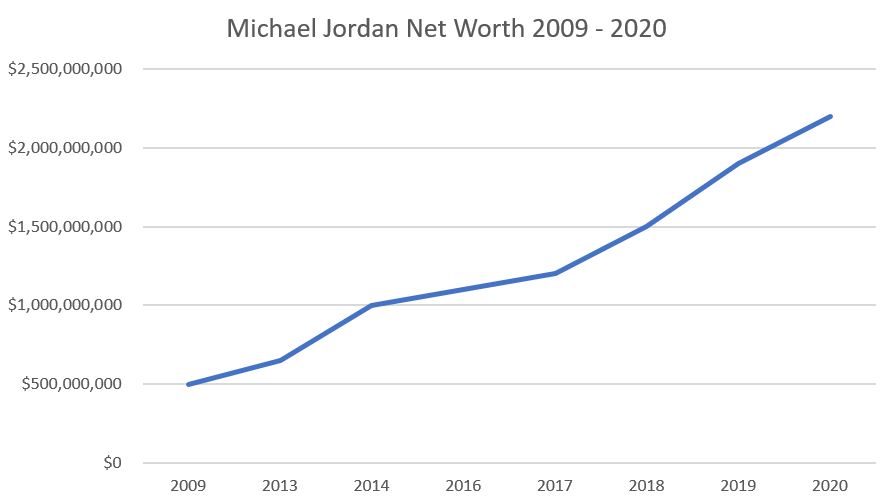 Michael Jeffrey Jordan was born on February 17, 1963, in Brooklyn, New York. His mother Deloris worked in finance and his father James R. Jordan Sr. was an equipment supervisor. When Michael was a toddler the family moved to Wilmington, North Carolina.

Michael played basketball, baseball, and football at Emsley A. Laney High School in Wilmington. He famously tried out for the varsity basketball team as a sophomore but was rejected for being “only” 5 foot 11. Enraged at the rejection, MJ worked himself to the bone to excel on the Junior Varsity team. Over the summer between his sophomore and junior years, he grew four inches and subsequently earned that coveted spot on the varsity squad.

Michael lit the varsity team on fire, averaging 25 points per game during both his junior and senior years. As a senior, he was selected to play in the 1981 McDonald’s All-American Game in which he scored 30 points.

Not surprisingly, Michael, who now stood 6 foot 6, was recruited by dozens of college programs including Syracuse, UVA, Duke, and the University of North Carolina. He ultimately chose to attend UNC.

At UNC he averaged 13.5 points per game and was named ACC Freshman of the Year, leading the team to the 1982 NCAA Championship against the Georgetown Hoyas. With 15 seconds left in the game, Michael hit a go-ahead basketball over Georgetown Center Patrick Ewing. This would turn out to be the game-winning shot. Michael would later reveal that this game and that specific shot was a major turning point in his personal confidence and future basketball career.

Michael spent three seasons with the UNC Tar Heels, winning many accolades including the Naismith and Wooden College Player of the Year awards in 1984. He left UNC one year early to enter the 1984 draft. Impressively, Michael returned to UNC in 1986 to finish his degree and graduated with a Bachelor’s degree in geography.

Amazingly, he was not the first pick. He was the THIRD pick after Sam Bowie (#2) and Hakeem Olajuwon. Michael was chosen by the Chicago Bulls as the third overall pick.

Michael signed his rookie contract with the Bulls on September 12, 1984. The contract was a seven-year, $6 million deal, averaging to around $850,000 per season. In the year before Michael became a Bull, the team only sold out six total games. In Michael’s rookie season, attendance doubled. 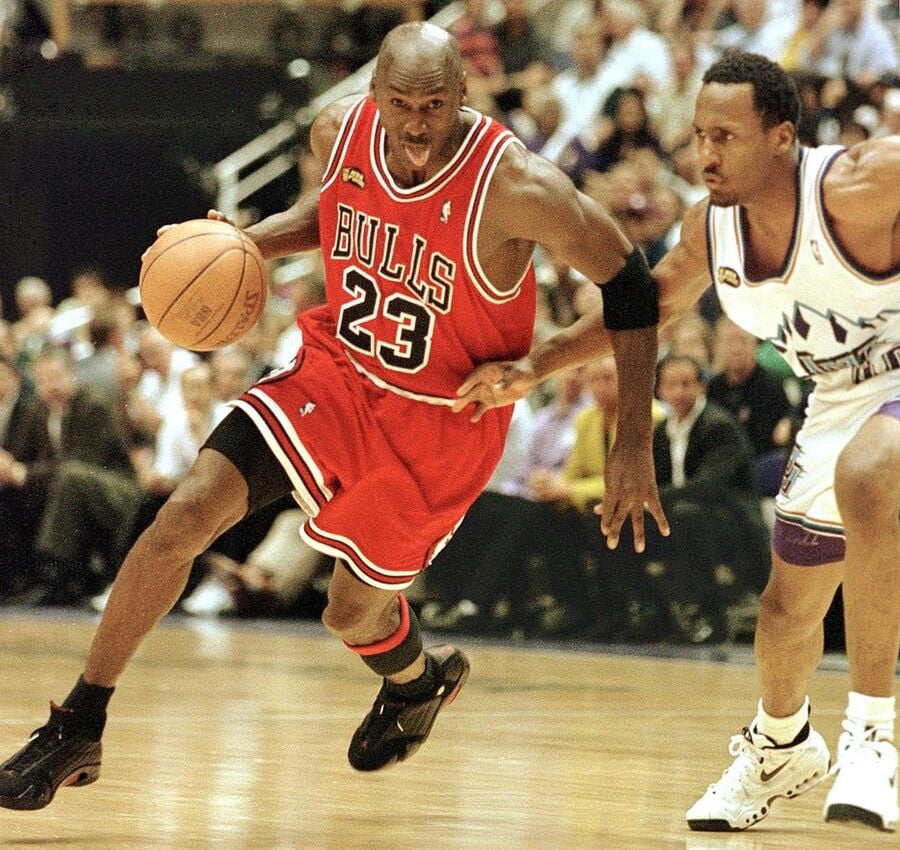 At the end of his fifth season, Michael and Chicago agreed on an eight-year, $25 million contract extension. It was the largest transaction in NBA history up to that point. Michael’s salary jumped to around $5 million per year as a result. When this contract was up in 1996, Michael signed a one-year $30 million deal. The next year he signed a one-year $33.14 million deal. The latter is worth the same as around $55 million today after adjusting for inflation.

As we’ve mentioned previously, Michael earned $93.7 million in total salary during his NBA career. After adjusting each year for inflation, he earned $161 million in salary. Below is a year-by-year breakdown of Michael’s NBA salary history: 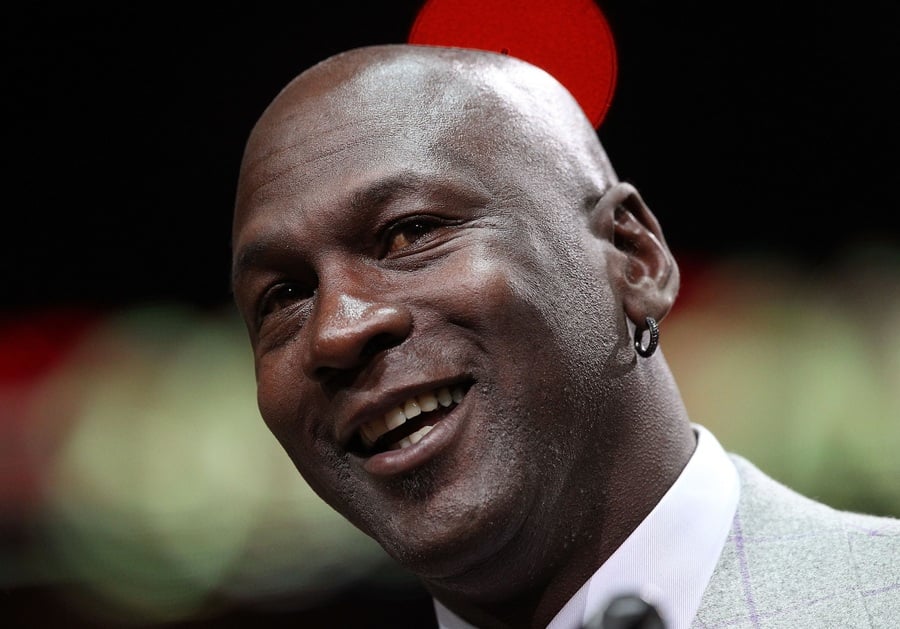 Before Michael Jordan, the largest celebrity shoe endorsement contract in the world was James Worthy’s $150,000 annual deal with New Balance. In 1984, Jordan shattered all endorsement records when Nike agreed to pay him $500,000 per year for five years. Jordan also received Nike stock options which brought his total compensation to $7 million over five years.

Prior to signing the deal, Michael had never worn a pair of Nike shoes in his life and had been hoping to sign with Adidas, but Nike’s offer was too rich to turn down and too much for Adidas to match.

When he debuted the shoes, they violated the NBA’s uniformity restrictions. Nike paid all the league’s fines and used the controversy to build excitement around the brand. The Air Jordan shoe first appeared in stores in March 1985 and two months later had sold over a million pairs. Within the first year, Air Jordan generated $100 million in revenue for Nike. Today, 58% of all basketball shoe sales are Air Jordans and the brand generates over $2.5 billion in annual sales for Nike.

In 1992, Michael earned 25 cents for every Jordan shoe that were sold. Today he earns $4 per shoe sold.

Today Michael Jordan’s annual Nike royalty check typically comes in around $80 – $100 million. However, in a number of years, his royalty check has topped $100 – $120 million.

Throughout his impressive career and even through to the present, Michael Jordan has been a spokesman for many corporate brands including Nike, Gatorade, Wheaties, McDonald’s, Coca-Cola, Chevrolet, Ball Park Franks, Rayovac, Hanes, and MCI. Jordan also maintains deals with Upper Deck, 2K Sports, and Five Star Fragrances. He owns a car dealership and seven restaurants.

After Nike, one of his biggest early endorsement deals, one that would become lifetime cornerstones for MJ, was with Gatorade. At the end of the 1989 season, Michael signed a 10-year, $18 million endorsement contract with Gatorade. Gatorade’s famous “Be Like Mike” ad initially ran after the Bulls won their first of six titles. The Michael/Gatorade partnership brought both the brand and the man to even greater heights of popularity.

A 2015 lawsuit against a supermarket chain that allegedly used Michael’s image without permission revealed that the superstar does not sign deals unless he expects to ultimately earn a minimum of $10 million from the partnership. We also learned that Michael at one point had turned down $80 million to endorse a line of headphones because he apparently doesn’t like wearing headphones.

As of this writing, Michael Jordan has earned $1.4 billion from corporate partners during his career (before taxes). 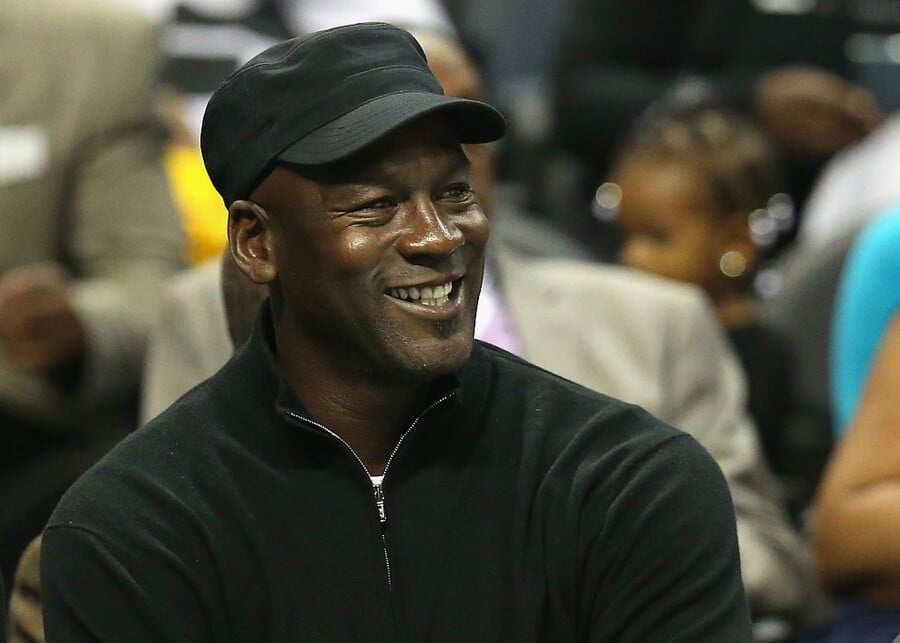 Michael married Juanita Vanoy in September 1989. They had three children together. When Michael filed for divorce from Juanita Jordan in 2002 after 13 years of marriage, he was ultimately forced to pay her a $168 million divorce settlement. It was one of the most expensive divorces in history. The settlement included cash, stocks, and the value of their various real estate holdings.

Michael has been married to Cuban-American model Yvette Prieto since April 2013. She gave birth to their identical twin daughters in February 2014.

How Michael Jordan Became A Billionaire

After taxes, divorce settlements, and other lifestyle costs, Michael’s net worth in 2006 was around $450 million. That same year, he bought a minority stake in the Charlotte Bobcats NBA team. At the time he was the team’s second-largest individual owner behind BET founder Robert Johnson. In 2010, Michael paid $175 million to buy out Robert’s stake in the team. With this transaction, Michael owned 80% of the team.

In June 2014, it was revealed that Michael had increased his ownership stake again, this time from 80% to 89.5%. At the time, the newly renamed Hornets had recently been valued at $500 million, with $135 million worth of debt. Around this time the Clippers, which had recently been valued at $500 million, sold for $2 billion. Assuming the Hornets at this point were actually worth $600 million, that meant Michael’s stake after the debt was worth $416 million, which, when combined with his $600 million outside fortune, made Michael Jordan a billionaire for the first time with a net worth of $1.016 billion. Read here for more info: Michael Jordan is a Billionaire.

In 2019 Michael sold a small piece of his stake to hedge fund managers Gabe Plotkin and Daniel Sundheim at a valuation of $1.5 billion. 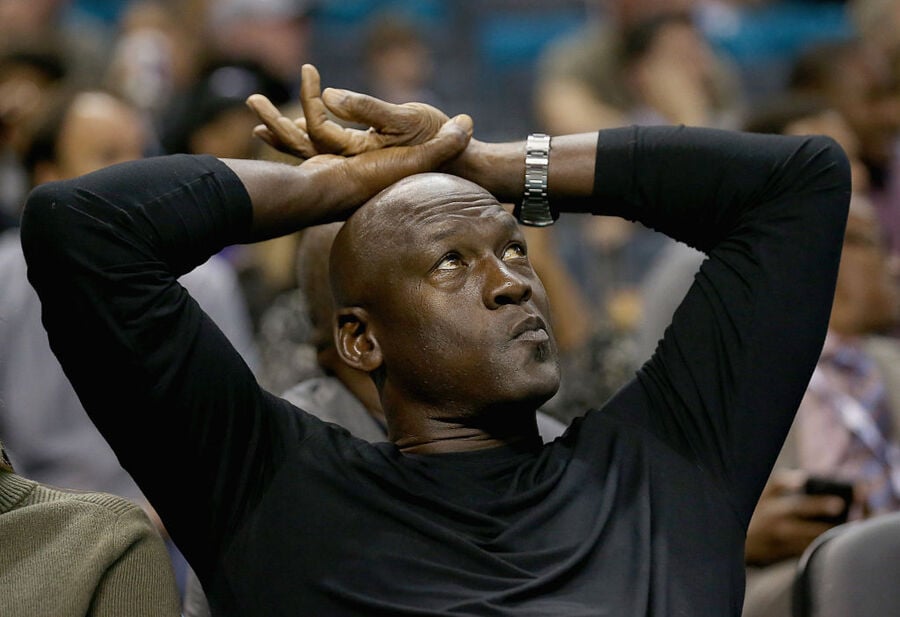 Michael’s primary residence today is a lavish mansion in Jupiter, Florida. The 26,000 square foot, 11-bedroom home sits on three acres located within Jack Nicklaus’ ultra-exclusive Bear’s Club community. He bought the lot in 2011 for $4.8 million, then spent two years and $7.6 million constructing a dream home. He also owns a $3 million lake home in Charlotte, North Carolina, and a luxury condo in the city so he can be close to his Hornets. He reportedly also owns a property in Salt Lake City, Utah.

Back in Chicago, Michael still owns a large mansion in Highland Park. Michael purchased a lot in Highland Park in 1991 and quickly set about building his dream home. The end result was a 7-acre property whose main house alone is 32,683 square feet. The house has nine bedrooms, 15 bathrooms, an NBA-quality basketball court, pool pavilion, 15-car garage, card room, tennis courts, PGA-quality putting green, cigar room, wine cellar… and so much more. Michael listed the house for sale in 2013 for $29 million. In May 2015 the price was reduced to $14.8 million. It has yet to find a buyer:

Michael Jordan owns a $50 million customized Gulfstream IV private jet that shuttles him to and from houses all over the world. The jet’s tail features Michael’s famous “Jumpman” logo. Here is a video of the jet taking off from an airport in Canada: 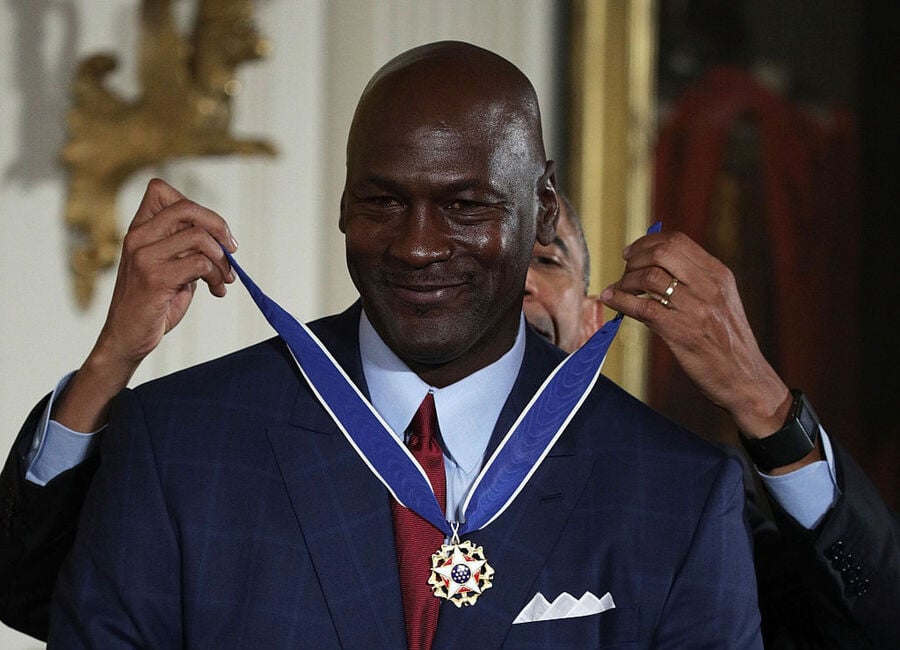 Michael Jordan’s net worth is $2.2 billion. During his career to date, he has earned $1.4 billion in pre-tax endorsement dollars. He earned around $93 million from his NBA salary. He lost $170 million in a divorce settlement with his first wife. Michael’s best career investment has been his ownership stake in the Charlotte Hornets. He bought a majority stake in the team in 2010 for $175 million. In 2019 he sold a minority portion of his stake to an investment group in a transaction that valued the team at $1.5 billion.

Who Are The Top 10 Attorneys in ManassasFind Attorney | Search Ads

Click to Expand
Michael Jordan Net Worth
All net worths are calculated using data drawn from public sources. When provided, we also incorporate private tips and feedback received from celebrities or their representatives. While we work diligently to ensure that our numbers are as accurate as possible unless otherwise indicated they are only estimates. We welcome all corrections and feedback using the button below.
DID WE MAKE A MISTAKE?
Submit a correction suggestion and help us fix it!

Celebrity Net Worthy Back to TopTOP100RANDOM