What are Manny Pacquiao’s net worth and career earnings?

Among many sporting circles, Pacquiao is considered one of the best “pound for pound” boxers of all time. He is the only professional boxer to be named an eight-division world champion and has won linear championships in five different weight classes. In addition to his athletic and political careers, Pacquiao has pursued a number of business ventures to emerge as a successful entrepreneur.

The biggest and most lucrative fight of Manny’s career took place in May 2015 against longtime rival Floyd Mayweather. When it was all said and done, between his guaranteed purse and pay-per-view bonus earnings, Manny ended up earning $130 million from the fight. During his career, he has earned at least $500 million from fights and endorsements.

Emmanuel Dapridran Pacquiao was born on December 17th of 1978 in Kibawe, Bukidnon, a small municipal area in the Philippines. He grew up with his mother and father among six siblings until sixth grade, when his parents separated. At a young age, Pacquiao was inspired to get into combat sports by watching Bruce Lee videos and Mohammed Ali fights.

His family struggled with poverty, and he had to drop out of high school as a result. Pacquiao began boxing at age 14 – the same year he left home in order to help his mother provide for his siblings. He has stated that he started boxing to survive, as it was something he knew that he was good at while living on the streets.

Pacquiao turned professional at age 16, although he had previously earned a spot on the national Filipino team at 14. His room and board were paid for by the government, and he had an amateur record of 60 wins and 4 losses. At 4’11 with a weight of 98 pounds, the 16-year-old Manny Pacquiao was not legally allowed to fight. He later admitted that he put weights in his socks during weigh-ins so that he could compete. He won his first professional light flyweight fight against Edmund Ignacio.

Although a loss against Rustico Torrecampo was an early setback for Pacquiao, he went on to win his next 15 fights. His first major title came when he defeated Chatchai Sasakul, and he followed this up by winning the super bantamweight title in 2001. In 2003, he fought at featherweight for the first time, dealing Antonio Barrera a TKO in the eleventh round.

In order to fight Erik Morales, Pacquiao moved up to super featherweight in 2005. Although he lost the initial fight against his rival, he won in 2006. After successfully defending the title against various fighters, Pacquiao beat Morales once again in 2006. 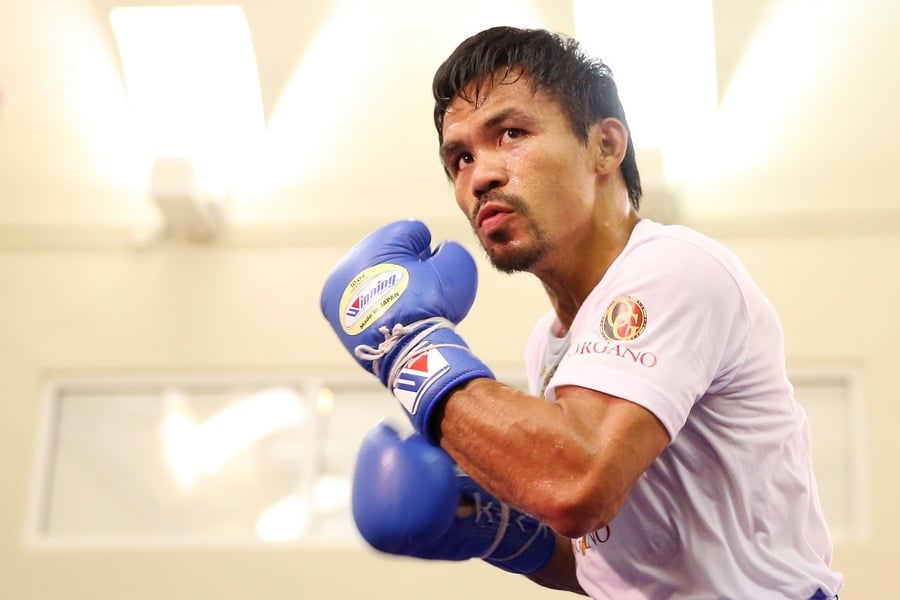 In 2008, Pacquiao moved up once again to the lightweight division, claiming his fifth title in the process. That same year, he moved up again to the welterweight division, beating Oscar De La Hoya after gaining weight to reach 148 pounds. In 2009, Pacquiao moved to light-welterweight in order to fight Ricky Hatton. After winning, he became a six-division champion. After continuing to fight in the welterweight class, Pacquiao set his sights on a new opponent – Floyd Mayweather.

Although negotiations with Mayweather initially fell through, Pacquiao continued to fight various fighters for the next five years, earning even more titles in the process. Finally, the two fought in 2015, with Pacquiao losing in a controversial decision. After temporarily retiring after the fight, Pacquiao returned to professional boxing with a number of additional victories, although Mayweather refused a rematch.

Approximately 20 million people have purchased pay-per-views for Pacquiao’s events. The sum of his 25 pay-per-view bouts equates to approximately $1.3 billion in revenue. In 2015 he was the second-highest-paid athlete in the world. Here are some more of Pacquiao’s biggest paydays:

Manny Pacquiao first ran for a seat in the Filipino House of Representatives in 2007 and was defeated. He followed this up by running for a different district in 2010, gaining success this time around. After becoming successful in the world of Filipino politics, Pacquiao ran for a seat in the senate in 2016. He won the seat and continues to be intimately involved with the politics of his home nation.

In addition to his career in sports and politics, Manny Pacquiao has also enjoyed a fruitful career in the entertainment industry. His appearances have been mostly limited to Filipino movies, although he also appeared once on Tosh.0. Rumors have been circulating about a possible appearance in Hollywood movies as well.

Manny married his wife Jinkee in 1999. They have five children together. Their daughter Mary Divine Grace is a popular YouTube personality in the Philippines. One of their sons is an amateur boxer and another son is a rapper.

In 2009, Manny and Jinkee paid $2 million for a home in LA’s Hancock Park neighborhood. The home, which was built the year before they moved in, has been listed for sale on and off over the years. In November 2021 they listed the home for $4.5 million.

May 28, 2022By admin
Net Worth Uncategorized