What is Justin Verlander’s Net Worth?

Justin Verlander is an American professional baseball pitcher who has a net worth of $150 million. He is probably best-known for playing for the MLB’s Houston Astros, with which he won the World Series in 2017. Previously, he played for the Detroit Tigers, helping lead the team to four consecutive AL Central Division Championships and two AL Pennants. Verlander is a multiple MLB All-Star and has won two Cy Young Awards.

In 2013, Justin signed a 7-year $180 million contract with the Detroit Tigers. Between 2017 and 2018, Justin Verlander earned $30 million between salary and endorsements. That was enough to make him one of the highest-paid athletes on the planet. In March 2019 he signed a two-year $66 million deal with the Houston Astros.

Justin Verlander was born on February 20, 1983, in Manakin-Sabot, Virginia to Kathy and Theodore. He has a younger brother named Ben. As a kid, Verlander went to the Richmond Baseball Academy, where he proved his skills by throwing an 84 mph fastball. He went on to attend Goochland High School, and then Old Dominion University. At Old Dominion, he played as a pitcher for the baseball team for three years. In 2003, Verlander posted 139 strikeouts to set a single-season school record; he broke his own record the next year with 151 strikeouts. Verlander finished his collegiate career as the all-time strikeout leader in the history of Old Dominion University.

While still in school in 2003, Verlander pitched for the USA national baseball team in the Pan American Games. The team won the silver medal, while Verlander earned All-CAA honors. In 2005, he began his professional baseball career after being selected by the Detroit Tigers in the MLB draft. Verlander played for two of the franchise’s minor league affiliates: the Erie SeaWolves and the Lakeland Flying Tigers.

Verlander had his first full MLB season with the Detroit Tigers in 2006. Over the course of the season, he struck out 124 batters across 186 innings and was named AL Rookie of the Year. Verlander and the Tigers went on to the World Series, where they lost to the Cardinals in five games. Success continued the next season when Verlander recorded 183 strikeouts and a 3.66 ERA. Although he had a spotty 2008 season, he bounced back in 2009 with an MLB-leading 269 strikeouts, the most by a Tiger since 1971.

In the spring of 2011, Verlander notched his 1,000th career strikeout in a win over the White Sox. Shortly after, he recorded his second career no-hitter against the Blue Jays. By the end of the season, Verlander had won the coveted Pitching Triple Crown in the AL, having led the league in wins, strikeouts, and ERA. Moreover, he received the AL MVP Award and won the AL Cy Young Award in a unanimous decision. 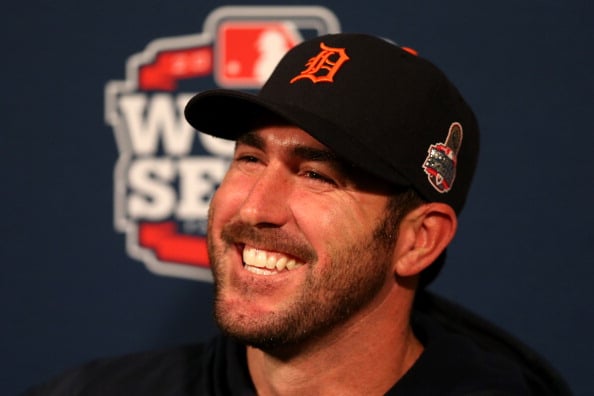 In 2012, Verlander helped the Tigers advance to the ALCS, and finally to the World Series against the San Francisco Giants. Ultimately, the Giants swept the Series. In a close AL Cy Young Award race, Verlander came in second to David Price of the Rays. Just before the 2013 season, Verlander signed a seven-year, $180 million contract with the Tigers, making him the highest-paid pitcher in the history of the MLB. During the subsequent season, he notched his 1,500th career strikeout and helped lead the Tigers to another ALCS appearance.

Verlander underwent core-muscle surgery in early 2014 and struggled with his performance during the first part of the season. For the first time since 2008, he failed to be named to the AL All-Star team; further, his 159 strikeouts were his fewest since 2006. Verlander began the following season on the disabled list due to a triceps strain. He was subsequently sent to the Triple-A Toledo Mud Hens on a rehab assignment, and then returned to the Tigers in June.

Following a rough 2015 season, Verlander came back in 2016 to record his 2,000th career strikeout. He finished the season with 254 strikeouts, leading the AL for the fourth time in his career. Once again, Verlander finished second in AL Cy Young voting, coming in just behind Rick Porcello. In his final season with the Tigers in 2017, Verlander tied a franchise record for the most strikeouts on Opening Day, with ten. He also posted his first career RBI.

In 2017, Verlander was traded to the Houston Astros. He had a hugely successful first season with the team, winning all five of his regular-season starts and finishing with 219 strikeouts. Verlander and the Astros made it to the ALCS, where they defeated the Yankees to advance to the World Series for the second time in franchise history.

The Astros ended up winning the Series in seven games against the Dodgers, giving Verlander his first World Series championship title. His success continued the next season, as he threw a complete-game shutout against the Angels, and recorded his 2,500th career strikeout. He finished the 2018 season with a career-high 290 strikeouts, and once again helped lead the Astros to the ALCS. Moreover, he once again finished second in Cy Young voting.

For the eighth time, Verlander was named to the AL All-Star team in 2019. Later, during the start of the regular season, he hit a milestone when he became only the 18th MLB pitcher to record 3,000 career strikeouts; more history was made when he finished the season with a career-high 300 strikeouts.

The Astros went on to another World Series appearance, this time losing to the Washington Nationals. Subsequently, Verlander won his second Cy Young Award. In 2020, due to injuries to his groin and forearm, Verlander missed most of the COVID-delayed season. The following year, he was placed on the injured list as he recovered from Tommy John’s surgery.

In early 2014, Verlander began dating model and actress Kate Upton; the couple got engaged in 2016. Two days after Verlander’s World Series win in November of 2017, the pair married in a medieval church in Italy. Together, they have a daughter named Genevieve.

In 2016, Upton and Verlander paid $5.25 million for a Beverly Hills estate with quite the Hollywood pedigree. The 5,706 square foot home was built in 1976. It previously belonged to tennis legend Pete Sampras, who bought it from musician Kenny G. It was also formerly owned by actress Kate Jackson, producer Jon Peters, and TV producer-director William Asher. The one-and-a-half-acre property has a pool and spa, a tennis court, multiple outdoor lounge areas, a maid’s room, and a bonus room with its own entrance. Justin and Kate listed this home for sale in January 2022 for $11.75 million.

In August 2021 Justin and Kate paid $6.5 million for a home in Jupiter, Florida. They also own a large plot of undeveloped land in the same town, where they plan to build a home from scratch.