What is Mike Tyson’s Net Worth?

Mike Tyson is a retired American boxer who was the undisputed heavyweight champion of the world in the late 1980s. As of this writing, Mike Tyson has a net worth of $10 million. During his heyday, Mike was one of the most famous and highest-paid athletes in the world.

He was the youngest champion in history at age 20. Unfortunately, he squandered and/or was bilked out of a personal fortune that topped $300 million at his peak. Mike declared bankruptcy in 2003. According to the bankruptcy filing, he was reported $23 million in debt at that point.

During his career, Mike Tyson earned at least $430 million in purses and endorsements, roughly $700 million after adjusting for inflation.

ESPN called him “The Hardest Hitter in Heavyweight History,” and Sky Sports dubbed him “the most ferocious fighter to step into a professional ring.” Although Tyson was a talented boxer, his reputation was marred by controversy in and out of the ring.

Mike Tyson was born Michael Gerard Tyson on June 30th of 1966 in Brooklyn New York. Tyson grew up in a rough neighborhood, and his stepfather was involved in crime and gambling. When Tyson was ten, he and his mother moved because of financial issues. By the age of 13, Tyson had been arrested for 38 crimes, often fighting bigger youths who made fun of his voice (Tyson speaks with a lisp).

During school, Tyson’s fighting ability was discovered by a juvenile detention instructor and a former boxer. After working with a few trainers, he linked up with Cus D’Amatto – a trainer who would have an immense influence on the future boxing champ. When Tyson’s mother passed away when he was 16, D’Amatto became his legal guardian. Tyson also worked with Kevin Rooney from a young age.

Tyson’s first experiences with professional boxing were in the Junior Olympics, where he won gold medals in 1981 and 1982. He also fought in the 1984 Summer Olympics but lost against Henry Tillman in two bouts. Tyson’s first professional fight came at age 18, and he beat Hector Mercedes with a first-round TKO.

This would start a growing trend for Tyson, who frequently ended fights in the first round. Tyson continued to fight opponents who were more challenging than those he had faced previously, with many predicting an early rise to stardom. Cus D’Amatto died in 1985, and Tyson lost an important father figure early in his career. Many later stated that this would prove to have a destabilizing effect on Tyson’s later life.

Tyson truly arrived on the world stage with a nationally televised fight against Jesse Ferguson. After Tyson caught Ferguson with an uppercut that broke his nose, the result of the fight was clearly inevitable. Tyson won after Ferguson was disqualified for illegally clinching.

Another televised event came when Tyson took on Marvis Frazier, a former world title challenger. Tyson won in just 30 seconds with a knockout. In 1986, Tyson beat Trevor Berbick in the second round to become the youngest heavyweight champion in history.

In 1987, he defended his title against James Smith to become the undisputed heavyweight world champion. That same year, he took on Pinklon Thomas in a 12-round battle to win the IBF title. This made Tyson the first heavyweight to ever hold all three major belts at the same time.

In 1988, Tyson beat Larry Holmes, a former champion, and knocked him out in the fourth round. Tony Tubbs suffered a similar fate that year as he suffered a TKO in the second round. Tyson rounded out the year with a victory against Michael Spinks. Although many pundits predicted a tough fight for Tyson because of Spinks’ technical ability, Tyson knocked him out in just 90 seconds.

From that point onward, Tyson’s career seemed to go downhill. After a number of personal problems emerged, Tyson decided to fire Kevin Rooney – the man credited with building Tyson into a top fighter after D’Amatto’s death. Although Tyson continued to win fights in 1989, his career would suffer a major blow when he lost to Buster Douglas in 1990.

Having lost his mother to a stroke 23 days before the fight, Douglas fought with passion and commitment. In the tenth round, Douglas unleashed a combination that sent Tyson to the canvas for the first time in his career. He was counted out by the referee in one of the most shocking upsets of sporting history.

Tyson continued to win in 1991 before legal issues halted his career. After being arrested for rape, Tyson spent six years behind bars. During this time, Tyson converted to Islam. Upon release, Mike Tyson was legally required to register as a sex offender.

Tyson’s comeback was successful at first, and he knocked out a number of opponents to regain two of his belts. However, he then lost his WBA belt when Holyfield came back from retirement to deal Tyson a TKO in round 11. Tyson lost again in the rematch when he controversially bit Holyfield twice and was disqualified as a result. Even worse, Tyson had his boxing license rescinded in 1997.

In 1999, Tyson returned to professional boxing once again to knock out Francois Botha – only to return to prison for nine months after allegedly assaulting two motorists. When he returned to boxing from prison once again, he knocked out a number of fighters in quick succession, either in the first or second round. In the year 2000, he knocked out Lou Savarese in 38 seconds.

Tyson’s last professional victory was in 2003 when he beat Clifford Etienne in 49 seconds. After a number of attempted comeback fights, injuries, and defeats, Mike Tyson retired in 2005.

Cus D’Amatto taught Mike Tyson the “peek-a-boo” style of defensive boxing, which involved a high guard and rapid head movements. This is also an aggressive style of counter-punching which depends on charging the opponent, making him swing, and then taking advantage of openings.

In 1987, Mike signed a $27 million eight-fight contract with HBO that ran through his bout against Alex Stewart. Tyson defeated Alex Stewart in two minutes and 27 seconds. He then signed a long-term $120 million contract with Showtime that covered several matches, including Holyfield I and II.

During his career, Mike earned at least $430 million from fights and endorsements. That’s the same as around $700 million in today’s dollars.

For years it has been widely understood that a large chunk of his earnings, at least his pay-per-view earnings, were taken by promoter Don King. A court case would later reveal that Mike’s contract with King entitled the promoter to 30% of his earnings. This was technically illegal in Nevada.

It’s been alleged that after mysterious additional fees, Don would take 50% off the top before cutting a check to Mike. Example fees would include $100,000 per fight to Don King’s wife as a consultant fee. Don King’s sons were also paid $50,000 per-fight consulting fees. At his peak, Mike was paying the President of the Mike Tyson Fan Club $1,000 per week. The President turned out to be Don King’s daughter.

At other times his earnings were garnished by creditors like the IRS. For example, Tyson was paid $8 million to fight Danny Williams in 2004. Unfortunately $6 million of those earnings were directly garnished by the IRS, leaving Mike with $2 million personally for his efforts.

Below is a fight-by-fight breakdown of Mike’s paydays between November 1986 and his final professional fight in 2005. As you can see, his largest payday BY FAR was the $103 million he earned fighting Lennox Lewis in 2002. Of that $103 million, roughly $75 million was from a pay-per-view bonus.

In July 2020, Mike and Roy Jones, Jr. announced they were both coming out of retirement to face each other in a highly unusual exhibition match. The two reportedly struck a deal with a sponsor who ponied up $50 million to put on the fight.

Of that $50 million, each fighter could earn as much as $10 million if all Pay-Per-View milestones are met. Soon after the announcement, Mike claimed he would donate all of his earnings to charity. His representatives soon clarified with the following statement:

“Mike is committed to charitable causes at this stage in his life. Mike is making a substantial donation to charity to help those affected economically, medically, and socially by the pandemic. The exact amount will be determined after the bout.” 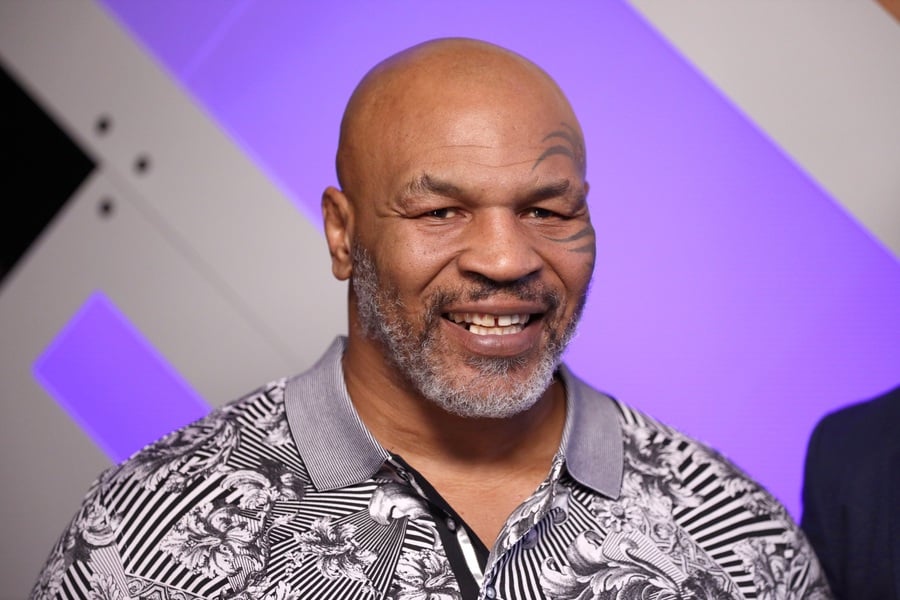 Mike lived a famously lavish lifestyle at his peak. He wasted millions on mansions, cars, jewelry, extravagant gifts for strangers, and even a collection of Bengal tigers. His tigers cost $70,000 a pop and were housed in a custom-built habitat in his backyard. Mike kept an animal trainer on staff at a cost of $125,000 per year.

Mike lavished money on his entourage as well. As just one example, he kept a person on staff whose sole purpose was to wear army fatigues and shout “guerrilla warfare” at press conferences. For his services, this person was paid $300,000 per year.

Mike was imprisoned between 1991 and 1995. In the three years immediately following his release, Mike spent the following amounts:

He also bought several homes. His 21-room Connecticut mansion would later be owned by 50 Cent. This mansion featured a nightclub and casino. Mike also bought houses in Las Vegas, Ohio, and Maryland. His Ohio mansion featured gold-plated furnishings, pools, and a basketball court. His $4 million Las Vegas property featured an 11,000 square-foot mansion that he proceeded to remodel from scratch.

Mike has owned well over 100 cars during his lifetime. Some were extremely valuable and rare. He owned a Bentley that was one of 73 total produced and cost $500,000. After totaling a Range Rover in 1995, he told the repair shop to “keep it.”

He would frequently lend cars to friends and acquaintances, then forget about them. He bought 20 cars at one Las Vegas dealership alone. That dealership, Jim Chaisson Motors, is where Mike spent $1.5 million in a few minutes one day, buying five Bentley Azures. The dealership only had two in stock and had to order the remaining three fast-tracked from Rolls-Royce.

One of the most outlandish purchases Tyson ever made was a $2 million golden bathtub for his first wife, actress Robin Givens. According to legend, he would periodically buy strangers lavish gifts like $100,000 watches.

Mike has been married three times. He has six children. He is a Muslim and practices sobriety.