What are Corey Seager’s net worth and salary?

Corey Seager is an American professional baseball player who has a net worth of $50 million. During his career, Corey Seager has played for the Texas Rangers and the Los Angeles Dodgers and was an All-Star in his first two seasons. In 2020, Seager helped lead the Dodgers to their first World Series title since 1988. He is a shortstop who bats left-handed and throws right-handed.

Corey Seager was born on April 27, 1994, in Charlotte, North Carolina to Jody and Jeff. He has two older brothers named Kyle and Justin, both of whom also play in the MLB. As a youth, Seager went to Northwest Cabarrus High School in Kannapolis, North Carolina. He subsequently planned to attend the University of South Carolina on a baseball scholarship but chose to enter the MLB instead after he was drafted in 2012 by the Los Angeles Dodgers.

Seager started his professional playing career with the Pioneer League’s Ogden Raptors. In 2013, he was promoted to the Class A Midwest League’s Great Lakes Loons, and then to the Class A-Advanced California League’s Rancho Cucamonga Quakes. For the subsequent off-season, Seager played for the Arizona Fall League’s Glendale Desert Dogs. Returning to the Quakes in 2014, he hit.

352 with 18 home runs and 70 RBIs and was selected to the California League All-Star team. In recognition of his playing in the California League, Seager was named its MVP in 2014. Following this, he was promoted to the Class AA Southern League’s Chattanooga Lookouts. For the 2015 season, Seager was assigned to the new AA Dodgers affiliate the Tulsa Drillers, of the Texas League; with the team, he hit .375. He was subsequently promoted to the Class AAA Pacific Coast League’s Oklahoma City Dodgers.

Seager was called up to the majors by the Los Angeles Dodgers in 2015. In his debut in September, he notched two hits and two RBIs. A little over a week later, he recorded his first homer in a game against the Arizona Diamondbacks. Seager went on to finish his regular season hitting .337 with four homers and 17 RBIs, and advanced with the Dodgers to the NLDS, where he became the youngest position player in Dodgers history to start a postseason game.

Seager continued his success in 2016; in June, he hit three home runs in a game against the Atlanta Braves. He was subsequently selected to the NL All-Star team. Seager finished the season with a .308 average, 26 home runs, and 72 RBIs, and again helped bring the Dodgers to the NLDS. In recognition of his season, he won the Silver Slugger Award and was named the National League Rookie of the Year. 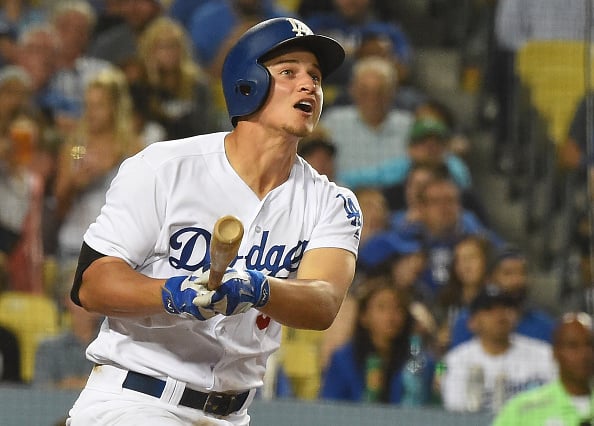 In 2017, Seager won his second consecutive Silver Slugger Award and was named to his second consecutive All-Star game. He once again helped lead the Dodgers to the NLDS, and then to the NLCS, although he didn’t play in the latter due to a back injury. Seager returned to the roster when the Dodgers made it to the World Series, which was ultimately won by the Houston Astros in seven games.

He subsequently had a limited season in 2018, as a right elbow injury required him to undergo Tommy John surgery. Further injuries beset Seager in 2019, specifically a strained left hamstring that placed him on the injured list. Prior to this, however, he had been having an incredible season, with a

.459 batting average. He came off the injured list in July, and continued to have a solid season, even recording new career highs of 44 doubles and 87 RBIs. Seager had his best year yet in 2020 when he led the Dodgers in batting average, slugging percentage, hits, doubles, and RBIs. He helped lead the team to the NLCS, where he was named the MVP upon the Dodgers’ victory. In the World Series, he and the team defeated the Tampa Bay Rays in six games, giving the Dodgers their first championship title since 1988. As he did in the NLCS, Seager was named the Series MVP.

Final Season with the Dodgers

Eligible again for arbitration in 2021, Seager signed a one-year, $13.75 million contract with the Dodgers. In September, he recorded his 100th career home run in a game against the Arizona Diamondbacks, the team he made his first-ever career homer against back in 2015. In the postseason, he and the Dodgers played in the Wild Card Game, and advanced to the NLDS, winning against the San Francisco Giants. Later, in the NLCS, the Dodgers fell to the Atlanta Braves.

Seager received a $2.35 million signing bonus after being drafted. His salary during the 2019 season was $4 million. Ahead of the 2020 season, Corey signed a one-year $7.6 million contract with the Dodgers. Through his first six MLB seasons, all with the Dodgers, Corey earned $27 million. He then became a free agent.

During his playing career, Seager has had a bit of a friendly feud with his brother Kyle, who played the third baseman for the Seattle Mariners. In August of 2020, the two-faced off for the first time in an MLB game, during which they both hit home runs; it was the first time a pair of brothers hit homers in the same game since Felipe and César Crespo in 2001. This brotherly encounter became the subject of a mini-documentary posted to the Dodgers’ YouTube channel. The year before this, the Seagers made history by becoming the first pair of brothers in MLB history to each hit at least 25 homers in the same season.

In December of 2021, Seager signed a 10-year, $325 million contract with the Texas Rangers, the largest in franchise history. The previous largest was Alex Rodriguez’s $252 million deal, made in 2000.