Skip to content
HOTTEST ARTICLE OF THE DAY Net Worth

HOTTEST ARTICLE OF THE DAY 2022

How Much of F45 Does Mark Wahlberg Own And What’s His Stake Worth?

The term “renaissance man” describes someone who has many talents and success. Mark Wahlberg is absolutely a true renaissance man. He’s an actor. A producer. A scratch golfer. A burger chain entrepreneur. A guy who wants you to say hello to your mother for him.

Oh. And he literally co-starred in the 1994 Danny Devito movie “Renaissance Man.” Look it up.

Put it all together and Mark Wahlberg has a net worth approaching $400 million by our count.

Mark’s latest venture is a chain of fitness franchises called F45. I’ve walked by a few F45s. I get the impression the classes are CrossFit + kickboxing with a live DJ… or something like that. Either way, they seem to be popular and successful.

F45 was started in Sydney, Australia by Rob Deutsch. After finding a unique formula Deutsch teamed up with a guy named Adam Gilchrist who had experience in franchising businesses. By the end of 2014, there were 15 F45s in Sydney alone.

According to the company’s reports, there are currently over 2,800 F45 franchises in 60+ countries.

In 2019, Mark Wahlberg teamed up with a Florida-based venture capital company called FOD Capital to buy a stake in F45. Their investment valued F45 at $450 million.

On July 15, 2021, F45 went public on the New York Stock Exchange under the ticker symbol FXLV.

Mark and Adam Gilchrist made the pilgrimage to the floor of the NYSE on the day of the IPO to ring the market’s opening bell: 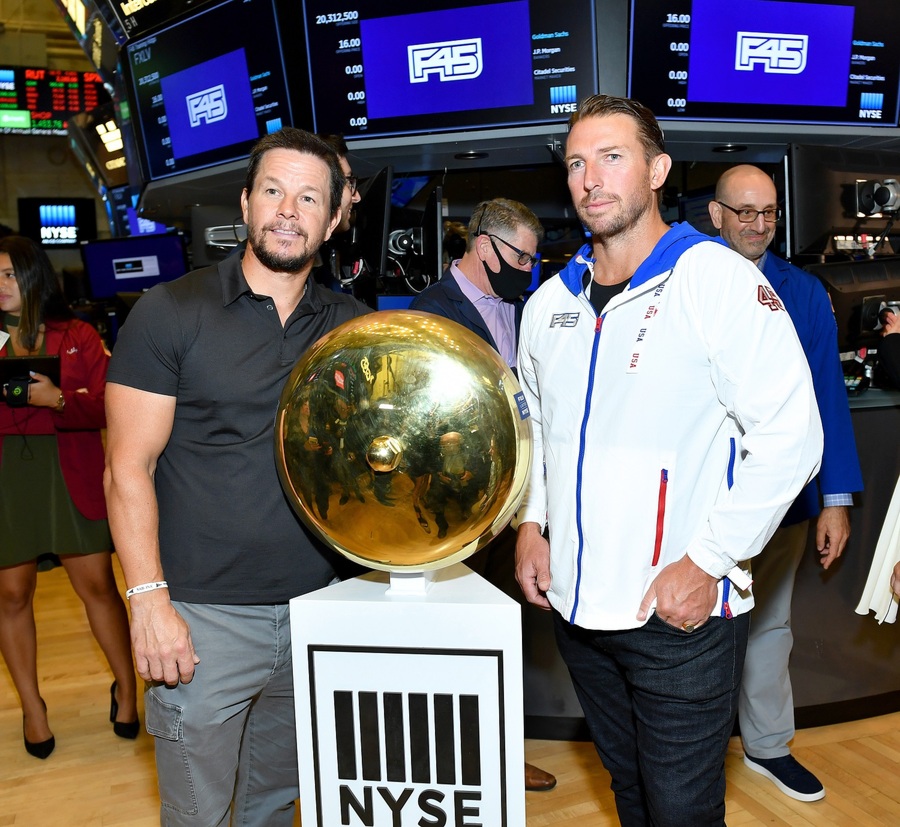 F45’s stock price ended its first day of trading at $16.20. That officially gave the company a market cap of $1.6 billion.

Over the last 8.5 months since its public debut, F45’s stock price has floundered. It has only closed above the IPO price once (on August 13) and has dipped as low as $9.38 (on December 1).

Between December 1 and late February, the share price climbed back up to the $15 range, but as I type this article it’s back down to $11.

How much of F45 Does Mark Own?

This question was harder to answer than I predicted before setting out to write this article. To quote Mark Walhberg from “The Martian,” “I’m going to have to science the shit out of this.”

Oh, wait. That was Matt Damon.

When you look at a list of F45’s largest shareholders, at the very top is Adam Gilchrist with 23 million shares, roughly 24% of the company. Adam’s stake is worth around a quarter-billion dollars. FYI, I do not see F45’s original creator Rob Deutsch anywhere in the top 20 company shareholders. He must have been diluted way down or bought out entirely.

As for Mark, at #8 you’ll find the following listing:

At $11 a share, Mark’s stake would presumably be worth around…

Not really all that impressive. But, as it turns out, that’s not the full picture!

My eagle eye noticed that F45’s second-largest shareholder is something called:

What is MWIG LLC? Does “MW” mean “Mark Wahlberg? Yes and no.

Dammit. That was Matt Damon again.

I really need to get Matt Damon out of my head. Please excuse me as I watch my favorite Mark Wahlberg movie, “The Departed.”