What are Georges St-Pierre’s Net Worth and Career Earnings?

Georges St-Pierre is a retired Canadian mixed martial artist who has a net worth of $30 million. Otherwise known simply as “GSP,” he is widely regarded as one of the best fighters in mixed martial arts history. He retired in 2013 as the reigning welterweight champion, having won the most title bouts in UFC history. However, he returned to the octagon in 2017 to beat Michael Bisping and claim the Middleweight title, taking his place as the fourth-ever multi-division champion in UFC history before retiring in 2020.

GSP won a number of awards and accolades over the course of his career. He was named Canadian Athlete of the Year and was inducted into the UFC Hall of Fame in 2020. Many people consider Georges to be the best welterweight fighter of all time, and he has accomplished more than most fighters can ever dream of.

Georges St-Pierre was born in Saint-Isidore, Quebec, in 1981. He was bullied incessantly in school and regularly had his clothes and money stolen by other students. Although he was active in a number of sports as a youth, he remained focused on martial arts since the age of seven as a means of self-defense against bullies at school.

By the age of 12, St-Pierre had earned a second dan black belt in Kyokushin Karate. Four years later, his karate teacher passed away, prompting him to learn wrestling, boxing, and Brazilian Jiu-Jitsu. Learning various martial arts wasn’t cheap, and Georges worked as a garbage collector and a bouncer to pay his tuition fees. By the age of 20, he was ready to become a professional fighter.

Although Georges started his UFC career strong with a win against Karo Parisyan at UFC 46 and followed up with a TKO win against Jay Hieron at UFC 48. However, GSP would suffer his first defeat at the hands of Matt Hughes, tapping out from an armbar in the first round. St-Pierre bounced back with a number of convincing victories against fighters like Jason Miller, Frank Trigg, and Dave Trasser.

After a win against Sean Sherk, GSP went down on his knees during the post-fight interview and begged the UFC to give him a title shot. After defeating B.J. Penn, it seemed as though he would get his wish. Unfortunately, a groin injury took him out of the title fight, and he was forced to heal and watch from the sidelines. During this period, GSP first appeared on “The Ultimate Fighter” as a trainer.

After much hype, Matt Hughes and GSP met once again at UFC 65 in a fight for the Welterweight Championship. Georges dominated in the first round and finished Hughes off in the second with a TKO. Unfortunately, St-Pierre would suffer his second-ever career loss against Matt Serra not long after at UFC 69. In 2007, GSP showed his strong wrestling skills with a win against Josh Koscheck. Intent on regaining the welterweight title, St-Pierre beat Hughes once again at UFC 79.

GSP was given a rematch against Matt Serra at UFC 83 and finished the fight with a convincing TKO. GSP subsequently defended his title against  Jon Fitch. He then controversially beat B.J. Penn in a fight that was overshadowed by GSP’s cornerman illegally rubbing petroleum jelly on his back to make him harder to hold. St-Pierre subsequently defended his welterweight title against fighters like Thiago Alves, Dan Hardy, Jake Shields, Carlos Condit, Nick Diaz, and Johnny Hendricks.

In 2013, GSP announced that he was taking some time off from the UFC, and he vacated his welterweight title until his return in 2017. That year, he fought Michael Bisping for the middleweight title and claimed victory in the third round. After a number of potential fights fell through, Georges officially retired from the UFC in 2020. 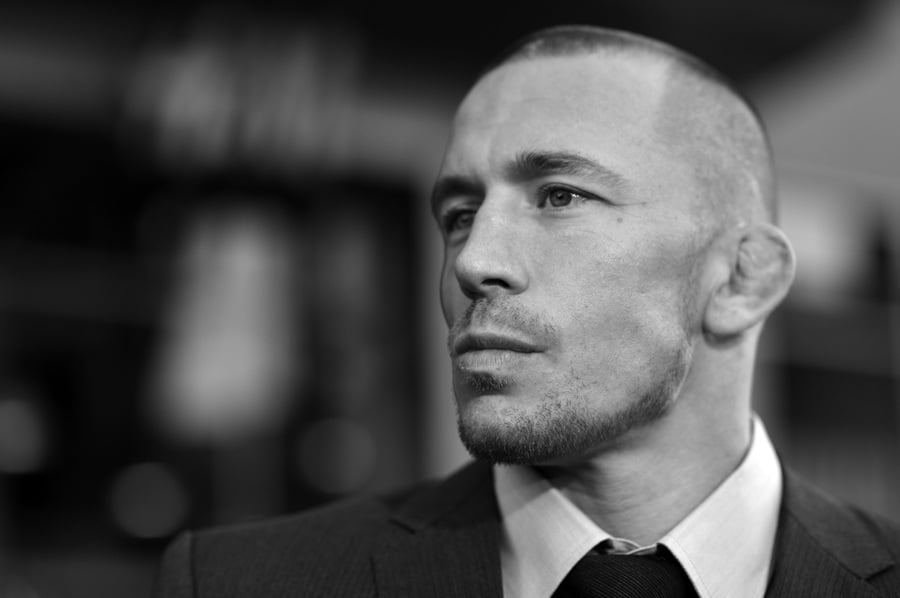 How much does Georges St-Pierre earn per fight?

When Georges St-Pierre was fighting in the UFC, he made millions of dollars per year, and he often earned six-figure sums per fight when all income sources were taken into account. At the very least, GSP earned $200,000 in guaranteed payment per fight. He earned an additional bonus payment of $200,000 if he won each fight, bringing his total potential base pay per fight to $400,000.

While $400,000 might sound like a lot of money, UFC insiders know that the real money comes from Pay-Per-View sales. As a fully-fledged UFC fighter, Georges was entitled to a significant stake in his fight’s PPV earnings. Each fighter can earn different sums depending on their contract, and the exact percentage that St-Pierre took home was never fully revealed. However, we can Randy Couture’s UFC contract provides a rough estimate of GSP’s earnings, as Couture’s contract was made available to the public. It’s safe to say that Georges was earning just as much as Couture, if not more.

Using UFC 158 as an example, GSP participated in a fight that generated 950,000 PPV buys. Based on Couture’s contract, GSP would have taken home at least $2.85 million in PPV bonuses. Keep in mind that this is an incredibly conservative number, as UFC president Dana White suggested that St-Pierre’s earnings that night were closer to $5 million. It’s safe to assume that GSP earned between $3.25 and $5.4 million from UFC 158 alone.

Georges St-Pierre further supplemented his income with a number of brand endorsements. He partnered with various brands, including Under Armour, NOS energy drink (owned by Coca-Cola), Hayaboosa, 888poker, Affliction, Electronic Arts, and Bacardi. All of these endorsements combined would have resulted in additional earnings of $1 to $2 million per fight. With all sources of income taken into account, GSP was earning $12 to $15 million per year at the height of his UFC career.