What are Gary Sheffield’s Net Worth and Career Earnings?

Gary Sheffield is a retired American professional baseball player who has a net worth of $90 million. Gary Sheffield played in the MLB for eight different teams between 1988 and 2009. During his career, he joined the 500-homer club and became the only player in history to post 100 RBIs in a season for five different teams. Sheffield finished his MLB career as one of the top 20 walks leaders in history.

Gary Sheffield was born on November 18, 1968, in Tampa, Florida, and was raised in the Belmont Heights neighborhood. Family, he lived with his uncle Dwight Gooden, the future New York Mets pitcher. It was from Gooden that Sheffield learned how to hit a fastball. At the age of 11, Sheffield was selected to the Belmont Heights Little League All-Stars and made it with the team to the 1980 Little League World Series. Later, as a teen, Sheffield went to Hillsborough High School, where he was on the varsity baseball team. In his senior year as a pitcher, he was able to throw a fastball in the upper-80s. Meanwhile, as a batter, Sheffield hit .500 and 15 home runs.

Following his high school graduation in 1986, Sheffield was drafted by the Milwaukee Brewers. He was subsequently shipped to the Pioneer League’s Helena Brewers, where he posted a .365 batting average and 71 RBIs across 57 games. In 1987, Sheffield was assigned to the Class-A California League’s Stockton Ports, and led the league in RBIs with 103. Next, he played for the El Paso Diablos and Denver, batting .327 with 28 home runs and 118 RBIs.

Sheffield made his major league debut in 1988 when he was called up from the minors. An immediate success, he scored a homer on his first career hit. In his second season, Sheffield batted .247 with five homers and 32 RBIs; in his third, he batted .294 with 10 homers. His final season was plagued by injuries, limiting him to 50 games.

In 1992, Sheffield was traded to the San Diego Padres. He went on to have his first All-Star season, and won the National League batting title with a .330 average. Sheffield began the 1993 season by batting .295 and hitting 10 homers, before being traded midseason.

With the Marlins in 1993, Sheffield finished his first season batting .292 and hitting 10 home runs. He subsequently signed a four-year deal that made him the highest-paid player at third base. In 1994, Sheffield was moved to right field. He had a highly accomplished tenure with the Marlins. From 1994 to 1998, he hit 112 homers, with 42 of them in 1996 alone. Moreover, Sheffield led the team to the 1997 World Series title by defeating the Cleveland Indians. 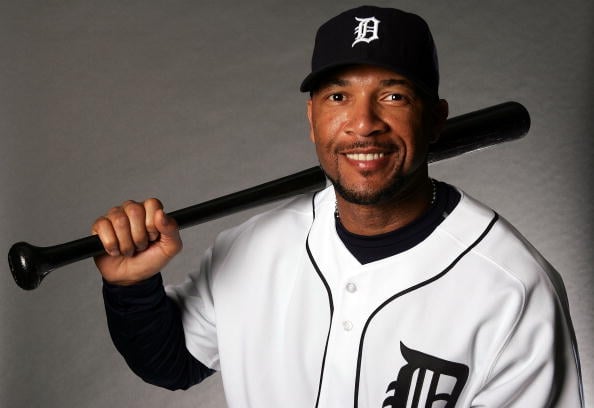 Sheffield was traded to the Los Angeles Dodgers in 1998. He finished his first season on the team batting .316 and hitting 16 home runs. Overall, across his 3 ½ seasons, he hit 129 homers and drove in 367 runs, and made three All-Star games. Despite this success, Sheffield frequently criticized the Dodgers for what he perceived as unwise spending practices.

In early 2002, Sheffield was traded to the Atlanta Braves. In his two seasons with the team, he hit 64 homers and posted 216 RBIs. Sheffield subsequently became a free agent for the first time in his career.

Sheffield signed with the New York Yankees in 2003, joining a lineup including Derek Jeter, Alex Rodriguez, and Jason Giambi. Although he had a slow start to his season, he finished with 36 homers and 121 RBIs. In his second season, Sheffield hit 34 homers. This was followed by a season beset by a wrist injury, which caused him to lose his right field position for first base.

Sheffield was traded to the Detroit Tigers in 2006. His first season was marked by 25 homers and 75 RBIs; additionally, he notched his first triple since 2004. In a September game against Oakland, Sheffield was the one to hit the 250,000th regular season homer in the MLB. He ended the season with 499 career homers of his own. Despite being owed $14 million, Sheffield was ultimately released by the Tigers.

For the 2009 season, Sheffield agreed to a deal with the New York Mets. In a game just weeks later, he hit his 500th career home run to become the 25th player in the history of the MLB to reach that mark.

Sheffield didn’t play in 2010. At the beginning of spring training the next year, he announced his retirement.

Sheffield has been the subject of many controversies and run-ins with the law throughout his life. In 1986, he, his uncle, and fellow baseball player Vance Lovelace were charged with violence and battery against a police officer. Pleading no contest, he was given two years probation. While still on probation, Sheffield was charged with DUI and had his probation extended for another 18 months. Later, in 1993, he got into more trouble on the road when he was arrested for driving 110 miles per hour in Florida and failing a breathalyzer test.

Among his controversies in the MLB, Sheffield got into a major altercation in 2008 when he was hit by a pitch from Indians pitcher Roberto Heredia Hernández. The two got into a bench-clearing donnybrook, causing Sheffield to earn a four-game suspension. In other controversies, it is suspected that Sheffield used steroids during his time in the MLB.

With his wife, gospel singer Deleon, Sheffield lives in Tampa, Florida. The couple has three sons, while Sheffield has four children from prior relationships.