What is Derek Jeter’s Net Worth?

Derek Jeter is an American former professional baseball player, businessman, and baseball executive. Derek Jeter has a net worth of $200 million dollars. During his career, he earned $265 million in baseball salary alone. He earned at least $150 million from endorsements for a total of $415 million in career earnings. He is known as one of the most popular and highest-paid athletes in recent sports history.

In 2003, he was named the eleventh captain in the team’s history. He was an All-Star 14 times and won the Silver Slugger and Gold Glove awards five times each. He is the only player in history to win both the All-Star Game MVP award and the World Series MVP award in the same season. He also holds the Yankee record for the most hits, beating Lou Gehrig’s existing record back in 2009.

In August 2017 Derek and a group of investors purchased the Miami Marlins for $1.2 billion. Derek owns 4% of the team and serves as CEO of the organization.

Derek Sanderson Jeter was born in Pequannock Township, New Jersey, on June 26, 1974. His parents met in Germany while serving in the United States Army. The family moved to Kalamazoo, Michigan, when he was four, and he began playing little league baseball there when he was five. Growing up, Jeter spent summers with his grandparents in New Jersey and became a passionate fan of the New York Yankees team after attending games with his grandparents.

Jeter was a highly-regarded candidate in the 1992 MLB draft, and he chose to turn pro when the Yankees, who had the sixth pick, drafted him. He signed with them for $800,000. Jeter played four seasons in minor league baseball from 1992 to 1995, initially playing with the Gulf Coast Yankees in the Rookie-level Gulf Coast League, based in Tampa, Florida.

Eventually, he was promoted to the Greensboro Hornets of the Class A South Atlantic League, where he played his first full season of professional baseball. There, he was honored with the Minor League Player of the Year Award by the magazine Baseball America. While in the minor leagues, he also played for the Tampa Yankees of the Class A-Advanced Florida State League, the Albany-Colonie Yankees of the Class AA Eastern League, and the Columbus Clippers of the Class AAA International League.

Jeter made his Major League Baseball (MLB) debut on May 29, 1995, after starting shortstop Tony Fernandez and infielder Pat Kelly were both injured. He was assigned uniform number 2, most recently worn by Mike Gallego from 1992 to 1994.

He was the first Yankee rookie to start as a shortstop for the team since Tom Tresh did in 1962 when he started for the Yankees on Opening Day in the 1996 season. He also hit his first MLB home run that day. He went on to win both Rookie of the Year and the World Series that year. He also played on Series-winning Yankee teams in 1996, 1998, 1999, 2000, and 2009.

He played his last season in 2014. The average ticket price for his final home game on September 25, 2014, reached $830 on the secondary market. Over his career, he averaged 204 hits, 113 runs scored, and 21 stolen bases per 162 games. He was the 28th player to reach 3,000 hits and finished his career ranked number six in MLB history for career hits.

He is one of the most highly-regarded athletes not only for his on-field performances but his off-field conduct as well, managing to avoid major controversy throughout his long career. He spent his entire 20-year career with the New York Yankees and was elected to the Baseball Hall of Fame in 2020, during his first year of eligibility. Furthermore, his uniform number, 2, was retired by the Yankees in 2017. 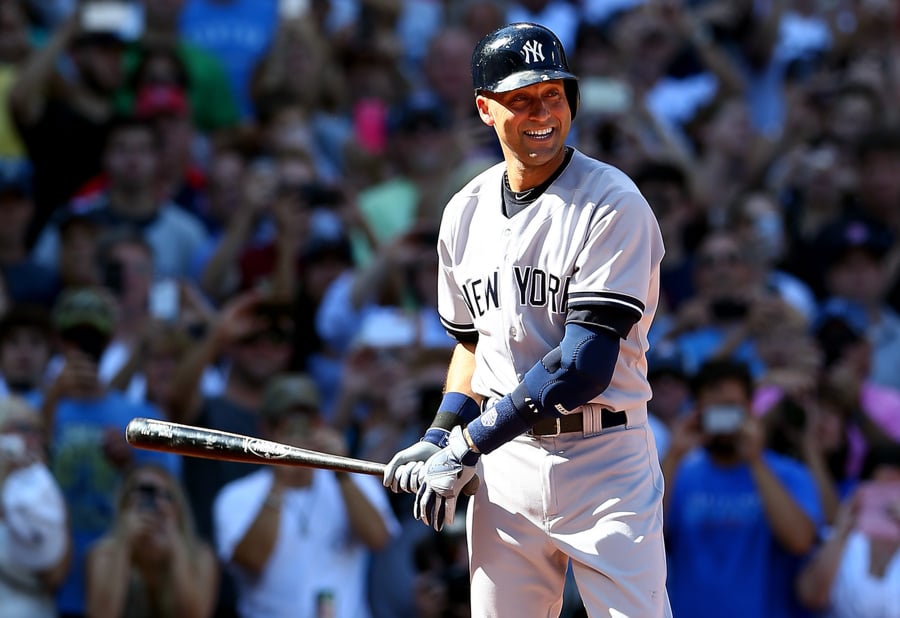 In 2013, after an injury cut his season short, Jeter formed an imprint with Simon & Schuster called Jeter Publishing. He referred to it as “the blueprint for postcareer.” He also created the website ThePlayersTribune.com in 2014, which publishes daily sports-related content. Since September 2017, Jeter has been the chief executive officer and part-owner of the Major League Baseball team the Miami Marlins. He only owns a 4% stake in the franchise, with partner Bruce Sherman acting as controlling owner, but Jeter oversees the day-to-day operations of the team.

Due to his high-profile status, Jeter’s personal life has been much scrutinized by the media. He was previously in a well-publicized relationship with singer Mariah Carey from 1997 to 1998, and he has since gone on to date several other famous models and actresses, including Vida Guerra, Joy Enriquez, and Jordana Brewster, Jessica Biel, and Minka Kelly. He began dating model Hannah Davis in 2012, and the couple became engaged in 2015. They married in July 2016, and have two children together

As we stated previously, Derek Jeter earned $265 million in salary and $150 million from endorsements.

In 2010 Derek signed a three-year $51 million deal with the Yankees. Ahead of the 2014 season, he signed a one-year $12 million contract for his final MLB season.

At the peak of his career between salary and endorsements, Derek Jeter earned $30 – $35 million.

Derek’s success and clean-cut image attracted a number of very lucrative endorsement deals with companies like Nike, Gatorade, Discover Card, Fleet Bank, VISA, Ford, and XM Satellite Radio. He is considered one of the most marketable players in the history of baseball. He designed a cologne in collaboration with Avon named “Driven,” which he also endorses.

In August 2017 Derek and a group of partners, notably Bruce Sherman, finalized a deal to acquire the Miami Marlins for $1.2 billion. Jeter reportedly paid $25 million, a discounted rate, for a 4% in the team.

Unfortunately by 2021, the team’s valuation had dropped to $990 million. At that level, Derek’s 4% stake was worth $40 million. Still again over his $25 million investment, but not a great sign of things to come. In late February 2022, it was announced that Derek had severed his relationship with the Marlins and had sold his 4% stake back to his partners at a $1.12 valuation, the lowest team value in the entire league. When it was all said and done, Jeter paid $25 million for a stake that he sold five years later for $44.8 million.

Greenwood, New York: In 2005 Derek paid $1.2 million for a 4-acre historic property in the upstate town of Greenwood, New York. He proceeded to fully restore the property which sits on 700 feet lakefront. Derek’s maternal grandfather actually grew up on the property. In 2018 Derek listed the property for sale for $14.75 million. As of this writing the home is still on the market with an asking price of $1.275 million.

Tampa, Florida: In 2011, Derek custom-built a 22,000 square-foot waterfront mansion in Tampa, Florida. The home became nicknamed “St. Petersburg.” When Tom Brady moved to Tampa to play for the Buccaneers, he and his wife Gisele Bundchen rented the home for $75,000 a month before they purchased their own mansion for $17 million.

Miami, Florida: In April 2021 Derek paid $16.6 million for a 2-acre waterfront undeveloped lot in Coral Gables, Florida. The parcel has 325 linear feet of waterfront. As this mansion is being constructed the Jeters live in a different Coral Gables mansion which he purchased in 2018 for $6.5 million.