What is Dennis Eckersley’s Net Worth and Career Earnings?

Dennis Eckersley is a retired American former professional baseball player who has a net worth of $20 million. Dennis Eckersley played in the MLB for 23 years with such teams as the Cleveland Indians, Boston Red Sox, and Oakland Athletics.

He achieved his greatest recognition as a closer, becoming the first pitcher in the history of the MLB to have both a 20-win season and a 50-save season. After his retirement, Eckersley went on to become a part-time color commentator for Red Sox broadcasts on New England Sports Network. He was a 6-time All Star, a World Series champion, an American League MVP, and an AL Cy Young Award winner. He was inducted into the Baseball Hall of Fame in 2004.

Dennis Eckersley was born on October 3, 1954 in Oakland, California, and grew up in Fremont. As a teen, he went to Washington High School, where he was a quarterback on the football team for his first three years. He gave up the sport as a senior in order to protect his throwing arm from injury. Eckersley also played baseball in high school; as a pitcher, he won 29 games and threw a 90-mile-per-hour fastball.

In the 1972 MLB draft, Eckersley was chosen in the third round by the Cleveland Indians. This disappointed him originally, as he had hoped to be drafted by the Giants. Eckersley ultimately made his MLB debut in April of 1975; an immediate success, he posted a 13-7 win-loss record and a 2.6 ERA before being named American League Rookie Pitcher of the Year.

Thanks to his long hair, mustache, and impressive fastball, he also became a favorite among fans. One of Eckersley’s most notable games with the Indians came in May of 1977, when he pitched a no-hitter against the California Angels. That year, he won his first All-Star Game selection.

Eckersley was traded to the Boston Red Sox in 1978. That season, he won a career-best 20 games. In 1979, he won 17 games. Eckersley had declining success over his remaining four years with the Red Sox, with his fastball in particular losing its luster. He finished his tenure in 1984 with a 43-48 record.

During the midseason in 1984, Eckersley was traded to the Chicago Cubs. Significantly that year, the team went on to make its first postseason appearance in 39 years. The following season, Eckersley put down an 11-7 record with two shutouts. Unfortunately, his performance declined in 1986, with his record being 6-11 and his ERA at 4.57. Eckersley had been struggling with alcoholism during this time, and after the season concluded, he checked himself into rehab. 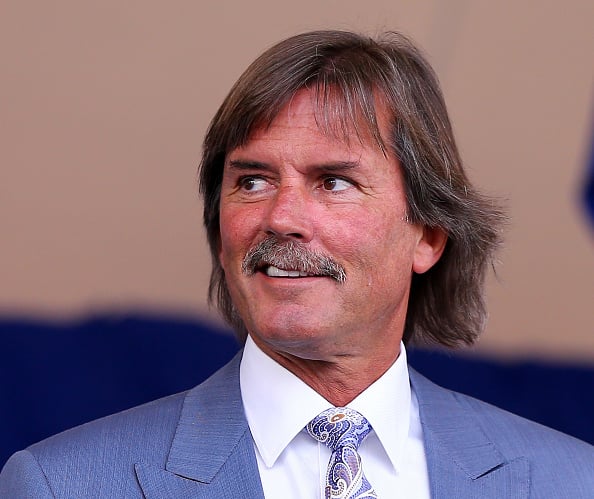 In 1987, Eckersley was traded to the Oakland Athletics; manager Tony La Russa wished to employ him as a long reliever or set-up pitcher. In the closer role, he saved 16 games in his first season with the Athletics. The next season, he fully established his reputation as a top closer by posting league-leading 45 saves. The Athletics advanced to the ALCS, where Eckersley had saves in all four of the games en route to a sweep of the Red Sox. Although the Athletics lost to the Los Angeles Dodgers in the World Series, they came back strong in 1989 to sweep the World Series against the San Francisco Giants.

From 1988 to 1992, Eckersley was the most dominant closer in baseball. During this time, he saved 220 games and never had an ERA higher than 2.96. Additionally, Eckersley walked only three batters across 57.2 innings in 1989; four batters across 73.1 innings in 1990; and nine batters across 76 innings in 1991. In recognition of his achievements, he earned both AL MVP honors and the Cy Young Award in 1992. Following this, his numbers declined, and after the 1994 season, he became a free agent. In 1995, Eckersley signed a new one-year contract with the Athletics.

Eckersley was traded to the St. Louis Cardinals in 1996. In his two seasons with the team, he continued to dominate as a closer, posting 66 saves. Eckersley subsequently signed for the second time with the Red Sox in 1998, and served as a set-up man for Tom Gordon. At the end of the year, he announced his retirement from the MLB. Eckersley finished his career with a 197-171 record, 390 saves, and a 3.5 ERA.

During his career, Dennis Eckersley earned a total of $27.6 million in salary. He earned several million more from endorsements. At the peak of his career in 1993 and 1994, he earned $3.8 million per season. After adjusting for inflation that’s the same as earning $7.5 million today.

In 2003, Eckersley began working as a studio analyst and color commentator on New England Sports Network broadcasts of Red Sox games. He quickly became known for his mild-mannered presence and unique on-air vernacular. From 2008 to 2012, Eckersley served as a studio analyst at TBS; he subsequently called Sunday games and did postseason analysis for the network.

Eckersley has been married multiple times. He wed his first wife, Denise, in 1973; they had a daughter named Mandee. During their marriage, Denise had an affair with Eckersley’s teammate Rick Manning, with whom she went off in 1978. Two years after that, Eckersley married model Nancy O’Neil. The couple had a daughter named Allie and a son named Jake and divorced shortly after Eckersley retired from baseball in 1998. Eckersley’s third wife is a former lobbyist named Jennifer.

Notably, Eckersley is the subject of an MLB Network documentary. The film, entitled “Eck: A Story of Saving,” premiered on the network in December of 2018.