What is CC Sabathia’s Net Worth?

CC Sabathia is a retired American baseball pitcher who has a net worth of $80 million. CC Sabathia played in the MLB for 19 seasons, primarily with the New York Yankees. Before that, he played for the Cleveland Indians and Milwaukee Brewers. A Cy Young Award winner and six-time All-Star, Sabathia helped lead the Yankees to a World Series title in 2009.

In December 2008, CC Sabathia signed a 7-year $161 million with the New York Yankees. At the time the deal made him the highest-paid pitcher in MLB history.

During his career CC earned $260 million in total baseball salary. His highest-paid seasons were 2015 and 2016 when he earned $25 million in base salary each year.

Carsten Charles Sabathia Jr. was born on July 21, 1980, in Vallejo, California. As a teen, he went to Vallejo High School, where he played baseball, football, and basketball. Sabathia also played summer baseball in the MLB youth program Reviving Baseball in Inner Cities.

He was offered scholarships to play college football and signed a letter of intent to enroll at the University of Hawaii. However, after graduating from high school in 1998, Sabathia went directly to the minor leagues. In the 1998 MLB draft, he was chosen in the first round with the 20th overall selection by the Cleveland Indians. For three seasons, he pitched in the organization’s minor league system.

In 2001, Sabathia started his rookie season as the youngest player in the MLB. He went on to finish the season with a 17-5 record and finished second in AL voting for Rookie of the Year. The next season, he signed a four-year, $9.5 million contract with the Indians. In 2003, Sabathia was named for the first time to the AL All-Star team; he received a second consecutive selection in 2004.

The following year, he threw the fastest fastball in the AL at an average of 94.7 miles per hour. Sabathia’s breakthrough year came in 2007 when he posted a 19-7 record with a 3.21 ERA, 209 strikeouts, and a league-leading 241 innings pitched. Moreover, his pitching led the Indians to their first ALDS championship in six years. In recognition of his performance, Sabathia won the 2007 AL Cy Young Award.

Sabathia came off his 2007 high with a disappointing season in 2008, in which he began with a 6-8 record. An impending free agent, he was ultimately traded.

In his first and only season with the Brewers in 2008, Sabathia had a great deal of success; he helped the team clinch the wild card to make it to its first postseason appearance in 26 years. However, the Brewers ultimately fell to the Philadelphia Phillies in the NLDS. Still, he managed to strike out 251 batters in an MLB-leading 253 innings across his season and came in fifth in NL Cy Young Award voting. 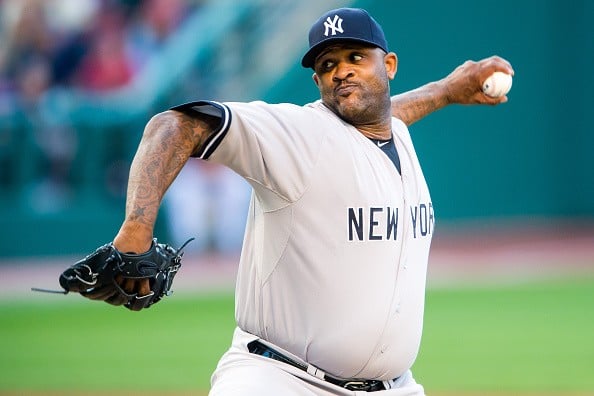 In December of 2008, Sabathia signed a seven-year, $161 million contract with the New York Yankees, the largest contract for a pitcher in MLB history at that time. He went on to finish his first season with a 19-8 record and a 3.37 ERA. The next year, Sabathia notched his first career postseason win with the Yankees in the first game of the ALDS. Sweeping the series in three games, the team advanced to the ALCS,

and then to the World Series, the Yankees’ first since 2003. Facing off against the defending champion the Phillies, Sabathia helped lead the Yankees to their first World Series title since 2000, and their 27th overall.

Sabathia continued his success over the years following his World Series victory. In 2010, he earned his fourth All-Star selection and ended the season with an MLB-best 21 wins. He made it to his fifth career All-Star game in 2011, and also took a perfect game through over six innings in July. In September, Sabathia recorded his 2,000th career strikeout. Among his other achievements in 2011,

he struck out 230 batters, the third-highest number in a single season in Yankees history. In 2012, the team made it back to the ALDS, where Sabathia dominated by winning the deciding game against the Baltimore Orioles. However, he lost the fourth game of the ALCS to the Detroit Tigers. In October of 2012, Sabathia underwent arthroscopic surgery on his left elbow.

Sabathia struggled through the 2013, 2014, and 2015 seasons. In the former, his season was curtailed due to a hamstring strain. Sabathia’s subsequent season was cut short due to right knee difficulties and resulting surgery. Finally, in 2015, Sabathia was placed on the disabled list and ended up checking himself into an alcohol rehab facility later in the year.

He improved his performance in 2016 when he notched his 100th win as a Yankee. Sabathia subsequently experienced something of a resurgence in 2017, leading the Yankees to the ALCS. The following season, he posted his 1,500th strikeout as a Yankee and helped the team advance to the ALDS.

Beginning the 2019 season, Sabathia was on the 10-day injured list as he recovered from heart surgery. He had his first start of the season in April in a 4-0 win over the Chicago White Sox. A couple of weeks later, he posted his 3,000th strikeout, becoming the third left-handed pitcher ever to reach that number.

Sabathia was on and off the 10-day injured list throughout the remainder of the season. In September, he made his final regular-season pitching appearance at Yankee Stadium. During the postseason, he pitched in the eighth inning of the fourth game of the ALCS against the Houston Astros. In October, Sabathia officially announced his retirement from the MLB.

With his wife Amber, Sabathia has four children: sons Carsten Charles III and Carter, and daughters Jaeden and Cydia. The family resided in Fairfield, California before moving to Alpine, New Jersey upon Sabathia’s signing with the Yankees.